I believe in miracles.
Where ya from

This here's one of them housecleaning posts. So sit back and enjoy the ride.

Beware of the office piranha: Male bosses warned of man-ea 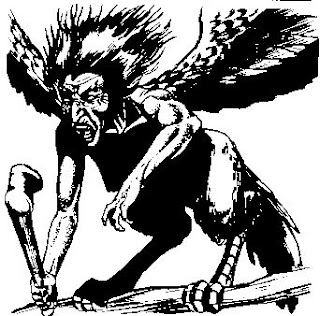 ting women who are preying on them.


Yay, predator women! Keep it up, bitches. Y'all make "high maintenance" (whatever that means!) seem downright prim and demure, sort of quaint-like.

[I bring up "high maintenance" only because Hols just gave me a candle with a fragrance of the same name, for some reason. I think she must have been distracted and looked away as she was reaching for the "sweet little lamb" candle she meant to buy for me instead] 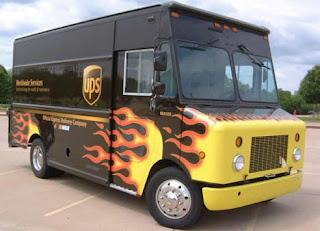 s rolled smooth-the-hell on by my office with nary a nod in my direction. We are not amused.


Don't make me go harpy on your ass, UPS. You won't like me when I'm harpy.

DFW area cab driver Yaser Abdel Said apparently kilt his 17- and 18- year old daughters and left their bodies in his cab at the cab stand of a local hotel.

This guy is either going to do the sensible thing and off himself, or we are in for one helluva floor show as he tries to avoid being flame roasted here in the land of capital punishment. Either way, he's so toast. I'm expecting some immaculately effed up explanation as to why he thought his daughters needed to die - prolly something like them acting like Western hos. In any case, you've got to wonder about the self-loathing of a person who could kill their own children. Execution in this case is a mercy killing, if you axe me.
______________________
I've pretty much not been watching tv in recent months, save the oc 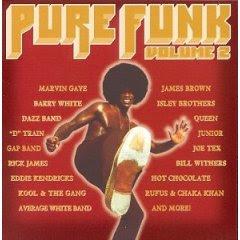 casional Project Runway episodes. I have to say Gillian with her 70s denim and rainbow-stripe-suspender obsession is really working my nerves. Then there's the issue of her namby-pamby voice, all mushy, wimpy and reeking of that sappy-fake femininity that is the earmark of a pain-in-the-ass passive-agressive bitch. Victorya is wearing, as well.

Breda - I'm rocking out my Ruby Pumps nail polish. Thanks for the recommendation. They all glittery up in dat shit. I'm rolling to the sonorous tones of the funk hits of the 70s. That's what I'm saying. And when I look at my nails through my polarized sunglasses, I'm feeling very not-in-Kansas anymore. Now I need to get a job where I can just sit around and admire my own manicure all day every day. Visions of red-glitter-vinyl diner booths are dancing in my head. *bliss*
______________________

Tell me something good...

Tell me that you love me.

Posted by phlegmfatale at 2:06 AM

And speaking of The Brown Truck of Happiness™, Mrs Myron gets so much crap sometimes the UPS delivery technician, the FedEx bringer of debt and the USPS letter misdirector all gather on our patio for lunch. When that happens you know, as Delbert McClinton sings, "You've got too much stuff".

myron - Yes! I are officially a happy camper, now! Well, for me they only deliver shoes, so it's not as though they come for me frequently. Just the modest 2, 3 or 4 pair of 'Vogs I'm able to acquire in a year. Honestly, if this pair had arrived by Dec 31, I think it would only have been my third pair of the year. Now I'm getting started early on the '08 crop, and I expect a bumper year, filled with shoe-lust as I'm feeling at the moment. That sounds like a fabulous song, though - gonna look it up.

oh, yay! I'm so glad you like it. It reminded me of red vinyl sparkly bike seats. =)

I'll make you wish
there was forty
eight
hours
to each day.........
so wierd you would chose to bring up that song. A good friend of mine ( who used to commute into chicago with me daily,and who I'm lunching with tomorrow..) and I used to sing it on and of the train quite frequently..
waaaaah waaaooooowww

Thanks for the warning to hold on, this was indeed a wild ride of a post. I almost got thrown there a couple of times by the radical turns we took!

You know exactly why you got the High Maintenance candle, you little Minx. Don't go all coy on me now, Be-yatch!

Those shoes are the ULT! I just wish my foot was smaller so I could borrow them sometime.

Yaser better NOT be bringin' his bad self up into MY neighborhood. We got some tall trees, short ropes and men who know how to tie nooses up in here! We teach that feller the meaning of chokin' slowly and Pain and Sufferin'.

I'm just sayin'...we don't hold with killin' no younguns where I live, even if they are misbehavin' a bit, or gettin' too big for their britches. Shoot, if we killed all of 'em who did that, there twouldn't BE no Next Generation. Feller and all his Radical Mohamadean Brothers needs to get a real strong Grip on REALITY here. This ain't some 3rd world shithole where womenchilds are Property that they can DISPOSE of when they get angry! The Brothers be facing the Wrath of Gawdess Almighty HerOwnSelf they pull that stunt.

And no more of that barbaric female circumcision, neither! Leave the little girls' private zones ALONE! God made them perfect, leave them that way, you hear what I'm sayin'?

I got lost in Miami once with my pilot. We ended up in a less than upscale neighborhood. He was afraid to stop. . period. . let alone for directions, but I said. Look we'll stop at THE next place of business we see. It was a car lot. Used. Full of very similiar vehicles. . though not as pristine.

The Name of the Place. ."Get Down Motors".

I have that kind of polish too -- called Ruby Slippers. I can only do it when I have a lot of time/patience to paint or else I get all fidgeting and mess it up.

I thought the name for such predatory women already existed: "cougar". ;-)
Rowrr~!

schnoobie - isn't it weird how that happens? I love that song! Have fun with your old buddy!

Hols - *blink* *blink*
Yes, glorious! UPS truck came by while I was at lunch with me boss, today, so maybe Friday... *whimper*
Yeah, Yasser will find few friends here, I think. Yeah! Yeah! Everything you said! I'm with ya.

becky - I got it all smudgy at first, and the next day, I took time to do one new layer and then to lacquer a thick top-coat on -- it took forEVAH, but the effect is lovely.

dirtcrashr - You sound like you don't really mind vampy women. Tough guy like you can handle it, though, I 'spect.

When I walked into the casino today, "Superfreak" was playing.

That was so much fun to read. You kill me. Been too long since I parused.

As far as I understand it, "High Maint." refers to women, or men, who demand way too much attention and adoration, like they were really somebody, or somethin'... you dig... Like one of your spoiled assed tennants.

fhb - well, it's a busy time of year. *L* Yeah, I see what you mean! Yes, I'm demanding and have a few teeny things I'm picky about, but at least I'm not neurotic or erratic. Oh, and I have to say I have a few extremely spoiled tenants, but most of them are absolute lambs, and for those folks, I'll go out of my way to do all I can to help. More flies with sugar, ya know.