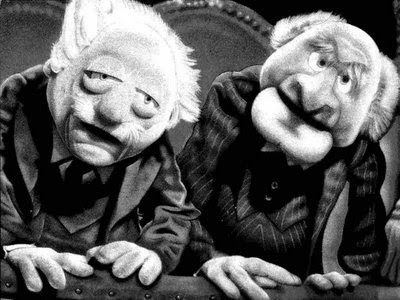 My Grandpa is a big bag of contradictions. He likes to be kind and helpful to people, but he can be a withering critic. He loves to laugh and cut up, and yet he takes himself very seriously. Perhaps a little too seriously. He also has an exacting memory for when other people fall short of the glory of himself, and he never forgets. This said, he probably still thinks of me as the wild granddaughter with pink hair. Well, he's still right about the wild bit, but anyhoo...
At my Grandma's funeral 1.5 years ago, my great-uncle W. told my brother "I guess the next funeral y'all come up for will be mine." W. had been having health issues, and apparently he felt his time was short even though at about 77 he was younger than my grandpa by at least 15 years.

About 5 months ago, W was driving home one day, wife in the passenger side. Doctors think W had a teeny stroke and passed out behind the wheel, wrecking the vehicle and suffering a spinal injury in the process. Since then, W has been paralyzed from the neck down and in the hospital.
tralalalalalalalallala
When I went to see Grandpa at Thanksgiving, he launched into a story about hauling livestock in a big truck, driving multiple runs from- and to- Indiana to make money in the 1940s. Grandpa asked W to drive so he could get some sleep. Well, W dozed off and nearly wrecked the truck, awakening Grandpa in the process. Being the one-strike & you're out kind of guy, W was forever in Grandpa's mind firmly cemented as someone-who-goes-to-sleep-whilst-driving. Nodding-off behind the wheel as a teenager is on par with being a wife-beater: having achieved the title, you must don the sobriquet in perpetuity. Myself, even if the event last year WAS the result of falling asleep, I'm going to give a body a pass on only slipping up twice in 8 decades on earth. Call me lax.
tralalalalalalalallala
There was talk, of course. Grandpa will not be dissuaded from his quaint views of the universe. The one notion that likely saved him utterly from blaming W for this accident is probably the nagging suspicion that the one in the car with the ovaries was behind the wheel and caused the accident. After all, what moron thought it was a good ideer to have women drivers?
tralalalalalalalallala
Incidentally, Uncle W was in the Air Force. I've heard tell he was part of the crew that analyzed the MiG of the defecting Russian in the late 70s, the first MiG the US military got to interfere with in the Biblical sense. He was an aircraft mechanic, a brilliant man, a capable farmer, forest ranger, an enterprising man, and none of his children have embarrassed the family by breeding-out-of-wedlock or having non-Baptists in woodpiles and such. W passed away early Saturday morning, and we'll miss him. Bless you, Uncle W.
Posted by phlegmfatale at 8:19 PM

Sad news, still you all have your memories of him so he will never be forgotten.

You live to a ripe old age in your family, it's good to think that in 50 years time you will still be out there kicking "celebrities" in their butts.

But that was damn funny, the pic you led off with! I swear, as you got into the "Indiana" part, I saw Statler and Waldorf barking the whole way.

I hope the memories are fond!

Sorry to hear about Uncle W. But it seems you have fond memories of him and that's what counts.

I'm terribly sorry to hear about your uncle, Phlegmmy. He sounds like a fascinating guy.

My grandfather and his brother hauled cattle back and forth to Fort Worth in the 1930s, although I don't believe either of them fell asleep at the wheel. They did have a couple of steers hop out of their panel truck in downtown Fort Worth once, though.

Godspeed and at least he's finally relieved of the paralysis. I can not stand the confinement of immobility and would find that condition terrifying and frustrating to the Nth degree.

My condolences, Phlegmmy. It's not easy...

LaP, you know I'm here if you need anything.
I love to hear you family stories.
And how great that UncleW got to "know a MiG in a Biblical sense" that line had me rollin' off the couch!
I hope things pick up from here.

Phlemy,
Darlin' sorry to hear of your loss.

The other thing, darlin' I live on the right coast, I'm just workin' on the left.

I'm so sorry for your loss. You have some great and wonderful personalities in your family, and you have just lost one in Uncle W. My condolences.

My most sincere condolences Phlemmy. Keep those fond memories of his alive.

Oh I'm so sorry for your loss. Your uncle sounded like quite a character!

I'm so sorry about your uncle. There are so many dangers out there it's hard to avoid them all.

I'm sorry to hear about your uncle, but I have to admit that the stories of your grandpa cracked me up.