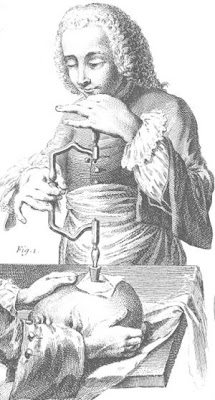 I know hypochondria comes in varying degrees in various people. Baby sis is a little paranoid about her health, but then again, she likes running for miles and miles. *insane* As she is a fun banterer/partner-in-crime and has produced my adored niece and nephew, I sort of give her a pass on the running. Because there's enough good in her personality, she gets a pass on the health freaky-outy-ness, too.

Another thing that helps to temper my view of paranoid people is that at one point I worked with an actual hypochodriac, and she's sort of the gold standard for me for medical weirdness and obsession. Jean's preoccupation with health problems made my affection for shoes seem like a passing fancy.

Her sons were grown, and I think she was still married, but obviously needed something extreme with which to fill her time. She was in her mid-50s and had a good, steady income with great medical benefits, so I suppose she was bored and off-to-the-races on the health front. Jean seemed to be out of work a lot, having surgery on this or that.

I was about 20 at the time, life was a grand adventure and I was preparing for my first trip to Europe. I, too, had security and financial freedom and it was just good to be alive. Jean was like a living diorama sort of exhibit for me, a peek in to another stripe of weirdness than I'd been exposed to with my very healthy, hardy family: genuinely freaky.

One day, Jean treated me to one of those conversations one never forgets. I was a social butterfly and made a habit of talking to various people at break, asking about their lives, and this particular day was her turn--lucky thing! Talking with her was sort of this vague, freeform conversation of fragmented sentences, Jean occasionally drifting off into her own head (she was my conversational role model). So, anyhoo, she started telling me she had headaches that wouldn't go away, and the doctors couldn't figure out why. In a conversational equivalent of T-boning someone at an intersection, she'd been rambling about her pain and cranial pressure then suddenly looked into my eyes and asked "do you think I should have brain surgery?" I was dying to say something like "if you're asking a 20 year old who hasn't been to medical school if you should have brain surgery, then, yeah, you probably need your brain worked on," but I didn't. I said something like "I think you should do what your doctors advise." I also for an instant teetered on the brink of suggesting a half-measure like trepanning, but that would be mean, wouldn't it?

These days when hypochondria comes whizzing by driving half in the median with its blinker flashing perpetually even though there's no exit for miles and with a wheel that looks like it's going to fly off at any moment, I recognize it for what it is: just plain crazy.
Posted by phlegmfatale at 6:29 AM

I know a guy that's had back problems for years. He slipped a disc in his lower lumbar (L5, as I've heard about it for over three years now), and he's been on drugs to kill the pain for alot longer than I've known him.

My father had a similar issue, only when he slipped his disc, he completely ruptured it, and when it left the spinal stack, it turned about 45 degrees and wouldn't line up. He had surgery (which is common) to repair it.

So, I suggested the surgery to this dude, and he says there's NO EFFING WAY he's having the surgery because the ONLY option is to remove the disc and fuse the adjacent vertebrae together, thus limiting movement.

Tried to tell him that ain't true. Didn't work. He's been on at least four different combinations of meds since I've known him, including some to correct issues caused by previous meds.

I'll take Loss of Movement Over a Lifetime of Drugs for $100, Alex.

One of my twins, Thing 2 to be precise, had a phase at around age 8 where she had every illness known to man, sometimes even simultaneously! One day, following a marathon gum-chewing session, she asked me seriously, "Mom, my jaw is really, really sore...do I have lockjaw?"
I guess in history class they were learning about various diseases of the past.
This is also the child who, while suffering from a cold and reading the "Little House" books, asked me if she had scarlet fever.
Thankfully she grew out of this phase!

I was a total hypochondriac when I was little. I think my upbringing made me nervous. I grew out of it eventually, but I'm pretty sure I have arthritis and rosacia. Maybe cancer too.

I'm gonna put "I told you I was sick" on my tombstone. A

I'm trying to quit laughin' long enough to type...ok, deep breath...and another.
I grew up with a hypochondriac Mother. It was just another facet of her narcississm. She self-diagnosed herself with a new disease or syndrome every time she read a new article in some magazine.
The worst was when, a la Pat Conroy's Mother in Beach Music[?] she told us she had bone cancer. Funny how she had a MIRACULOUS cure when my older bro demanded to meet her Doc @ MD Anderson.
Her disease du jour is spinal stenosis. Problem is...I check with the only one of her docs qualified to amke the diagnosis and...raaaaaanck, no suck DX in her chart.
So I'm loving it whenever AD does one of his posts on Fibromyalgia. One of the few diseases she's never claimed to have.

How bizarre! I had a roomate who said almost the exact same thing! Every time she had a headache, she was sure she had a brain tumor.