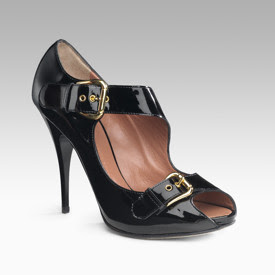 Giuseppe Zanotti whipped the best of all worlds into this confection of a shoe, a patent leather Double Buckle Mary Jane. I wonder what they feel like on? The heel is only 4", and considering the forward part of the shoe is bolstered on a built-in platform, this is not brutally high by a long shot. The top of the foot is further braced by the strap which crosses from the instep, so they probably feel a lot more stable than most pumps would. I also love the ideer of having shoes made by some guy named Giuseppe. Hey-- isn't that something from an old folk tale or something? If not, it ought to be.

I know: you're squealing with delight.
ME TOO!

I pronounce it officially slobber-worthy™.

Fetch me my drool-cup, Jeeves.

These days I'm officially blissed-out over my Dame Agnes booties which I have taken out of the box and sighed over, but have only tried on, never worn. I'll let you know when I trot them out for their official unveiling, glorious things that they be. But I tell you this: there is enough love in my heart for more shoes, always. Please don't worry that I might ever be tapped out on that score.
______________________________
Freaky thing happened on Thursday. I was over by American Airlines Center around mid-day (where the Stars and Mavericks play) and suddenly there was this huge sound everywhere, kind of like the MEEP! MEEP! of a backhoe when it's backing up, only, like, times a million. Then there was an announcer voice on loudspeakers from the AAC system announcing a test of the emergency announcement system. It then said "DO NOT EVACUATE THE BUILDING."

Shoulda been: "DO NOT EVACUATE YOUR BOWELS." Seriously - I liketa peed myself - it was beyond alarming. That's really going to kill business for Italian ices at Paciugo. I mean, you stop in for a delicious, icy pistachio-almond treat and something sounds like an air-raid event going on kills your sugar-rush moment -- was that really necessary?
_______________________
Friday again? How'd that happen?
________________________________
ADDENDUM: So in my mailbox this morning there's the following thing from the director of Dallas' Public Information Office:
Re: CERT training

The Office of Emergency Management sponsors free Community Emergency Response Team (CERT) training to the City of Dallas . CERT training promotes a partnering effort between emergency services and the citizens of Dallas . The goal is for emergency personnel to train members of neighborhoods, places of worship, community organizations, or workplaces in basic response skills. If a disastrous event overwhelms or delays the communityʼs professional response, CERT members can assist others by applying the basic response and organizational skills that they learned during the training.

If you are interested in training or finding out more information for a potential story, please contact Tahira Ali via email at Tahira.ali@dallascityhall.com or by telephone at 214-670-4279.

You have to wonder how often they test it? Were you just unlucky or is it a regular midday Thursday event.

Not the sort of thing you want to disturb a quiet lunchtime.

OK, I'm gonna ask the UN-pc question. Just how smart is it to put a woman [?] with a Muslim sounding name in charge of promoting the COmmunity Education Response training to something like oh, Ida know...a TERRORIST attack, maybe?
Dallas is NOTHING if not multi-cultural and ever-so metropolitan and PC these days, isn't it? I'm so glad I don't live there anymore. [No offense to those of you still there, I'm just glad I got out]

dba dude - I don't know how often they test it - I coulda done without it, though - nope - not my idea of a good time.

I still can't get past the shoe. It's the most fabulous thing I have seen all day.

Uh, Phlegmmy? Ummm.... maybe it's the fact that I'm a dude and all, but still... what exactly do you imply when you say that those Mary Jane's only have a 4" heel? I'm no expert, but unless you have a size 17.5, anything too much higher than 4" and you're no longer walking; you're ballet dancing.

At the spa we have piped in "soothing" music, via cable radio. Since it's radio, they have that stupid test of the emergency broadcast system. Let me tell you, there's nothing worse than being at the tail-end of a massage, your client is all relaxed, and the lovely harp and bagpipe duet is replaced by blaring alarm and the scary-voiced announcer intoning: This is a test...

barbara - it IS marvelous, innit?

speakertweaker - It's all relative, I suppose. I wore a pair of 4.5" Mary Jane pumps today, walked all over the property and then went and walked around a store with a concrete floor for about 2 hours after work, and my feet felt fine at the end of it. On the other hand, I have a pair of Prada kitten heels that are about 1.5" high and are screaming bloody murder after an hour or so of standing. It's all about how the shoe is structured and the weight distribution as well as how the upper of the shoe supports your foot. I have some higher-than-that heels that make 4" seem rather modest.

Yeah, nothing so bracing as those false alarm alerts - we'll all be properly panicked when the real thing comes along. It'll be a universal "Oh SHIT!"

It's a candy mint. It's a breath mint. It's two... two...two Community Emergency Response Teams in one!

Shame on you, Holly. For all you know, Tahira is a 6', 300# black woman shaking her finger and bobbing her head saying, "Oh, no you dih-unt!"

LaP, there you go teasing with the naughty shoes again. When will I ever learn?