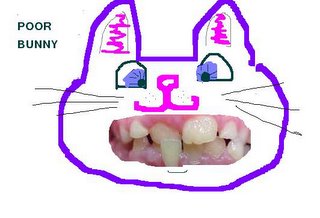 Yes, I'm one of those weirdo grownups with braces, and I will be so happy to get my braces off next summer (or fall, ugh). My teeth weren't THAT crooked, but comparing them now to how they were, I see they were more crooked than I realized. Anyway. I've always brushed and flossed religiously, never had a cavity, but now it's so hard to floss that I'm tremendously lazy about it. Sometimes I feel as though my teeth have sprouted fur. It's disgusting. And uncomfortable.
OH, there's one more thing. There is a blogger who I thought had a rather clever blog, and I posted comments to her occasionally. Today I popped back by her site for the first time in a week, and looked at the comments of an older post to see if she responded to my comment since last week. Not only had she NOT posted my comment, she posted the comment almost verbatim as her own clever statement. Now I think this is a shitty thing to do, and quite arrogant and ignorant to believe one won't be busted for such a thing. I said nothing, but I will be watching for more plaigiarism from her - Funny - I thought she was clever on her own - maybe it was ALL a rip-off. What do you think, bloggers? Am I over-reacting, or do you agree with me that it is beneath shitty to do such a thing???
Posted by phlegmfatale at 1:08 AM

I don't think you're over-reacting at all! In fact what a cheek!! You should expose her...

I was once the victim of a rather strange plagarism event. I wrote about it. I'll need to go search for the link, it was on my old blog. Be right back! :)

Wow, that is wild, Ian. Great story on that link. It's funny how my opinion of her was crushed instantly, like a bubble bursting. I'm very liberal about comments - I don't take it personally if someone filters their comments and makes an editorial decision not to include mine--I may be chasing a rabbit that breaks the flow of discussion--and the blogger is completely in their rights to control content of their blog including the comments. I suppose I was just shocked because it was so unexpected.

flogging is to good. The blogger should be exposed as a fraud and total asshat.

In a word?
Tacky.

Braces are totally worth it. You'll absolutely LOVE your teeth when you're through. :)

Braces are totally worth it! :) You'll absolutely LOVE your teeth and your smile when you're done.

I dont think you are overeacting, I know how I felt when I discovered that one of my visitors has stolen the picture from my blog,
well I didnt react cos it wasnt my picture to start with- I just fished it from somwhere on the net
still you feel violated when you see something that ha become part of you by posting on your blog being posted on someone elses blog
In your case even more so since it was actually your intelectual property.
I think you shoul point the finger and we should stone the bitch to death- lol
But here's an interesting thought ( I am not sure if I read this or its my thought-lol)but we are going to reach the stage when everything that was posssible to be said will be said and one will not be able to say anything without being influenced by something one read somwhere or seen even briefly on the net and never remebered it.
By the way re my posts its not just my spelling errors its also typos so kindly bear with me....

"Now I think this is a shitty thing to do, and quite arrogant and ignorant to believe one won't be busted for such a thing. I said nothing, but I will be watching for more plaigiarism from her - Funny - I thought she was clever on her own - maybe it was ALL a rip-off. What do you think, bloggers? Am I over-reacting, or do you agree with me that it is beneath shitty to do such a thing???"

If you think your teeth are furry now, they will be slimey at first when you get them off. As for the other, lame, but you're such a tease for not posting the link:)

tee hee! Good points, all! I'm going to keep my eyes peeled and see what she does. I'm not giving her any candy any more, though. Pearls before swindlers, or some such...

goody, slimy teeth. Sounds miserable. How long till they feel back to normal?
Oh, and teasing you is what I live for!

I've been wanted to get braces for a long time to close the gap in between my front teeth. I didn't get them a few years ago because I was already having problems with people treating like I was 15 years younger than I actually was but now sprouting grey hair I'm thinking that's not such a bad perk.

As for the rip off artist I say expose her. There are probably many other people she is stealing from without their knowledge. I think it's pretty bold of her since it's obvious that you visit her site. Did she think that you wouldn't remember what you wrote? Maybe her and James Frey should write a book together. She steals the ideas and he passes it off as his life.

I had a tiny gap between my front teeth too, nedra. I _loved_ that gap, actually, and like you, I look younger than I am, so the combination of my looks and my madcap nature make people think I'm much younger. The first thing I said when the braces were put on was "I feel like a teenager." Meaning I feel slobbery and socially awkward sometimes - I always assume the most vividly colored thing I've eaten is hanging on my front teeth like a freak flag, and like an ugly puppy that just wants to be loved, I'm too vivacious for people to break the news. Of course, that's just paranoia.

As for the rude person, I'm going to watch and learn. I appreciate everyone's input - I felt like I was being childish or something for being annoyed about that. I think if it ever happens again, it will be very ugly, and I mean that in the sweetest possible way.