One of the places in Dallas I used to frequent with friends was the Inwood Lounge, at the Inwood Theater. The Lounge was a space sliced off the lobby of the beaux-art period theater with grand friezes and wonderfully formed plaster embellishments festooning the ceiling. The lounge was divided from the theater with an 8' glass brick wall with an overflow of water down a black slate wall from about 4' down, beyond which a grand staircase could be seen sinuously clinging to the great curl of the wall in the theater proper. There was something so cool and airy about it. Curvaceous vinyl banquettes, the antiquity of the structure, drinking there seemed so much cooler and grown-up than slamming beers elsewhere.
It was also wonderful to luxuriate in the atmosphere before or after films like "Camille Claudel," "Jean de Florette" and anything foreign or too arty to make the regular circuit of megaplexes. Once I persuaded some friends to leave a bar with me on a Friday night and see "La Femme Nikita" at the midnight movie. (If you must be obnoxious, it's good to have friends along to remind you of it later!) I carried 2 or 3 small Duvel beers from Belgium with me wrapped up in a jacket. So, I'm drinking great beer, discreetly, and getting frankly a teeny bit trashed during the film, which I'd seen before. I was realizing I was sloshed when at a particularly tense moment I hiccupped loudly and the entire audience erupted in laughter, the tension broken. Not at all feminine--it was the most man-sized dinosaur hiccup I ever uttered. Thought I'd DIE. That was about 30 minutes after my beer bottle had rolled down the length of the raked concrete floor, merrily announcing its presence in some bizarre harbinger of the still greater spectacle I was to make of myself that evening. 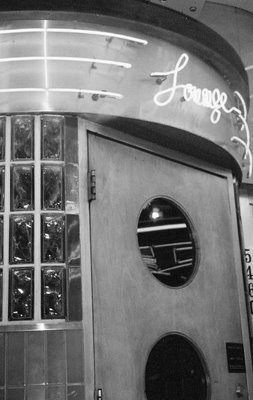 One night in the lounge, about 1991 or 1992, I was sipping martinis with a friend and we were watching a terrific jazz combo called "Freddie Jones Quartet." They were amazing. Freddie got on the mike and said they had a friend in the house, a poet, and he was going to sit in with them for the rest of the session. I don't remember the poet's name or most of verse, but one thing struck me and has always remained amusing and captivating when I remember it. Before they began to play, the poet announced this piece was called "Sadness," and the band played as he catalogued many stripes and degrees of sadness. The one that reigned supreme, however, was:

"The sadness of the Amish,

whose thighs know no jazz."

I would mention the sadness of the Amish, whose thighs know no barstools.

Posted by phlegmfatale at 1:00 AM

It's so nice to read somebody who's been to and hung out at all of the haunts I used to frequent.
Did you grow up in Dallas?
If so, what HS and class year?
For me, BA '79

Small world, innit. (If you tell me you went to On the Air on Lower Greenville, I may sully my drawers.) Graduated a small town south of Dallas in 1984, and moved to Dallas that year, but am originally from Arkansas.

yea sounds better with bar stools
like things like that
like this title of the blog I just saw:
Small hands
and then the subtitle-
nobody ~ not even the rain ~ has such small hands

duvel rulez bthw- my favourite,
isnt it silly I am only a few thousands kms from belgium and cant find duvel here still you can get it in dallas...

knight - if you're ever in Dallas, you MUST go to New Amsterdam Coffee House http://www.newamsterdamcoffeehaus.com/home.html I'll dig up some photos and blog it soon. My favorite drinking hole, along with Lee Harvey's, which was just two blocks from my last loft. Anyhoo, NACH has incredible Belgian trappist ales on draught, would you believe? Incredible bottle selection of great European liquid gorgeousness, too. OMG - have you had Trippel ales? Toe curling. My first trip to Europe was to Belgium in 1987 for the beer. Life is sweet!

No, I don't recall that place, but Mother Blue's was always a fav, as well as a few spots down on lower Greenville before it became fashionable.

I liked Theater Gallery, the first Video Bar, Clearview before it moved, and Twilight Room downtown. For a golden moment there was a seedy dive on Harry Hines in one of those cheap by-the-hour motels. The place was called the Nairobi Room, and it was divinely grotty. Gold wall paper with raised velvet flocking - looked like a wannabe saloon wallcovering. Red vinyl banquettes, pool table, homeless old winos, and punky little me out to taste the world's delights with my hair of many colors. Meow!