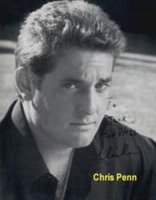 Sad to hear the best actor in the Penn family was found dead. He was great in True Romance, with script by Tarantino, of course. He played an undercover cop or SWAT team guy who was working on his first big bust with his partner. In Reservoir Dogs, he played the heir-apparent to a gangster-bookmaker type guy. Chris Penn was a natural actor, much less affected and pretentious than many of his contemporaries. A very distinctive voice, very believable in all his roles who I'm sure would have continued to surprise and delight avid film fans the world over. I'm very sorry he's gone, but I'm awfully glad he was here.
Posted by phlegmfatale at 10:55 PM