I believe the desire for privacy in one's dealings is a natural inclination. However, in such an exhibitionistic society where people flaunt their dirty laundry and make great show of what in another age would have been called embarrassingly personal, it falls a bit flat for people to decry the invasive aspects of government. For example, grocers and pharmacies now offer lower prices to "club" members who have an id card swiped with each purchase. This provides retailers with great information on demographics and buying trends, and an itemized list of every single thing you ever purchase from them.I wonder how long it will be before medical services are denied by insurance companies based on shared market data of one too many purchases of twinkies, Marlboros or Jack Daniels? 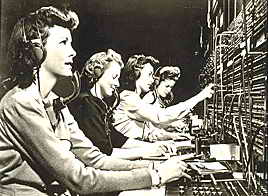 In particular, the issue of privacy of phone conversations is bothersome. Husband is an engineer in the world of telephony, and he once told me that a person should never deem they have absolute privacy when speaking on a phone--any phone. If I've mangled the reference, I'm sure he'll correct me. Maybe I always was aware of a lack of privacy vis-a-vis the phone because my paternal grandparents in Arkansas were on a party line until a mere 15 years ago, or so. It was known that Mrs. Gallagher might be (and probably was) listening in on a great many conversations, and statements thereon were tempered accordingly. Anyway, people are idiotic about phones, anymore. Sitting in traffic on the toll road yesterday, I noticed more than half the cars arrayed before me were piloted by people with their heads tilted toward the cell phone they were talking on. In another age, one of the great things about leaving the house was getting away from the phone. Remember?

Anyway, sitting with my lovely book reading at lunch, some idiot attorney sat at the table next to mine on a conference call discussing confidentiality agreements, (irony!) and how to cheat someone out of a referral fee and generally interrupting my lovely reading. The world has gone mad.

What I chalk all this up to is the fact that people are willing to throw their privacy to the wind if they feel they are getting something out of the exchange. This is a flawed thought process, in my estimation. You either believe in privacy, or you don't, and throwing in all sorts of qualifiers does not relieve you of the burden of hypocrisy. Not that the yearning for privacy is a wrong inclination. On the contrary: the bottom line is it's hypocritical for us to demand something of our government that our actions daily demonstrate we really don't give a shit about.
Posted by phlegmfatale at 1:40 PM

yea since my father worked in state security I was aware of the issue all my life,
but hey who givesd a darn, I am not doing anything illegal anyway,
and as for my long distance realtionship which by default contains loads of steamy phone or internet conversations if it excited accidental eawesdropper atl least I know I did somethin good for humanity.
But on a serious note, issues you are dealing with in this post are quite scary when you start thinking about them.
I remember those gloomy predictions of world conspiracy theoreticists about human race being totally controoled one day with a simple scan of a code bar.
Rememeber in the 80 -ies mobile phones and video conversations sounded equally impossible....

but I have to end this comment on a brighter note

your little angel is beautiful indeed
:)

But I must say, if we were separated at birth, I know which one of us got the brains!

I'll stop back by. You have some interesting reading!

You'll have to meet our other twin, Zelda in Houston. She's a pistol!

Oh, and thanks, Knight. I couldn't be more fond of her!

If someone ever confronts you with your steamy conversations, you could ask for a tape of them!

Oh God, you and Zelda are twins? lmao!

Yes, we are twins, and you are definitely the one with the brains. I have the monstrous bosoms.

As for privacy, thanks to dear old Hollywood, no one thinks they've had any anyway.

During the Clinton administration, they were doing the same thing for less important reasons and not only was it underreported, but it was accepted as fact by Hollywood. Just look at all the movies where the government has the mind-numbing capability of wiping out bacteria on the backs of sand fleas from outer space.

If you want my conspiracy theory on it, the assumption in Hollywood was that the reign of the Democrats would never end and people had to be indoctrinated as to what the government was capable of. But let a Republican try it after an unprecedented attack on Americans, and suddenly the print media/Hollywood is shocked and appalled.

I'm sure I don't need to say it, but they can place a big, smeary kiss all over my white ass.