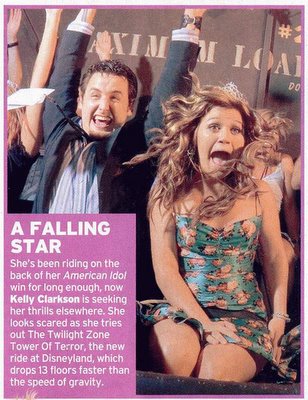 Since you've been blond...
[Um, who wants to break the news to Courtney that David's stepping out with Kelly?]

In the news this week, it was said that American Idol winner Kelly Clarkson will not give American Idol permission to use her songs in future competitions.

"American Idol" must obtain permission from owners of song licenses before the music can be used on the show. While many love the exposure, some artists _ the Beatles, for one _ like to rigidly control use of their music.

Mkay. Where to begin? The Beatles catalog is owned by the deeply in hock owner of Muzak(damn his eyes), Michael Jackson. In fact, by extension, Sony, who is owed tens of millions by Michael Jackson, owns the Beatles catalog. I'm not a Beatles fan, really, though I do like the loopy energy of "bigger than Jesus" weirdos like John Lennon, but I rather think the fab 4 all would have been aghast at the way their song trove has been plundered for advertising in recent years. Seriously - have you noticed McCartney parceling off his solo work for adverts? I haven't. Perhaps Junior's Farm would work for a GMC truck advert. With A Little Luck for Harrah's Casinos. Or No more lonely Nights for KY Warming Gel™. I DO give them at least a little credit for integrity.

Back to Ms.Clarkson. Not that I'm saying she must dance with the one that bru 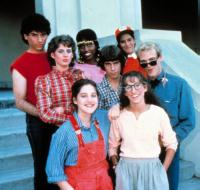 ng her, but it seems a bit silly to be stingy with American Idol, since her demographic is entirely comprised of AI devotees. Seriously. Does she think on the way home from Ozzfest a bunch of headbangers will pop in her cd to relive the glory of sublimely mindless moments? Or that she will rush in to fill the void left by Kurt Cobain? Or Michael Jackson, for that matter? Fiona Apple? Cher? I just think it's strangely awkward to be distancing herself from AI so soon after it made her a pop idol. Hell, I'm still amazed that Sarah Jessica Parker will not countenance any mention of Square Pegs, which was her artistic peak, in my opinion. I'll bet Jamie Gertz still puts it on her bio. But I digress - SJP's one-note symphony of dramatic expression is for another rant, another day, darlings.

Go forth and do as Big Dick instructs: Have a great weekend.

Posted by phlegmfatale at 11:22 AM

There was an update that she'll allow "some" songs to be on the show, but I can't imagine that the contestants themselves would be wise to choose hers anyway.

how do you do it? your mind must hurt with all that humor lodged in there.

I agree, Becky, those songs take better chops than even KC has - did you see her struggling on the MTV awards last year? She couldn't reach the high notes because her style of singing is so vocally unhealthy anyway. She won't be able sustain a career unless she alters her voice production radically. I do think she sounds good, it's just that it's ragging out her voice to carry chest voice so high. It's called belting, and 1 in a 100 million can make it with chops like Ethel Merman, and in an older woman, it ain't pretty. Still, you must respect the Big Mama chops.