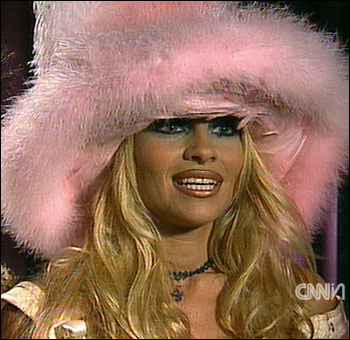 Pamela Anderson thinks Frankfort Kentucky should remove a statue of Colonel Sanders from the State Capitol because it is a "monument to cruelty." Um, she's from Canada, y'all! This is related to her involvement with that fun-loving bunch of folks over at PETA. Whether or not you believe in eating animals, it cannot be denied that people in Ukraine, Johannesburg and Seoul most likely are familiar with the name "Kentucky" not because of horse-racing and not because of bourbon and bluegrass, but solely on account of some good old southern fried.

(By the way that pink fluff festooning Mrs. Lee's hat is marabou which is the downy underside of an African stork. I'm sure the stork didn't mind parting with it - they probably peddled their under-wears on ebay™.) 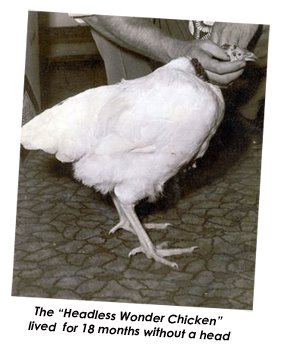 And another by the way - those rolls that KFC used to serve in the 70s - anybody besides me remember those? anybody? anybody? I thought they were better with that cheap (not my grandma's) gravy than the biscuits they sell these days. I confess I generally go to Popeye's.

Anyway, considering we're worm food, what does it say about us if we don't show our dominance by eating other critters? It says we're a bunch of cabbages--that's what it says. Do the folks at PETA think the ovens and buildings at Auschwitz and Treblinka should be razed because they are monuments to cruelty to human animals? (by the way, did the Nazis make the dark-skinned Jews move to the back of the ovens?) No, old concentration camps are kept as reminders. Maybe Kentucky needs to revise its Public Relations campaign and make the capitol a shrine to honor the dead carcasses of so many unsung chickens. That would be a win-win solution.

Am I the first to see the irony here? Bitch-assed hypocrite!
Posted by phlegmfatale at 5:55 PM

Good for you! But how do you REALLY feel?

I know, I really should be more forthcoming about my views. My friends have always lauded my tendency to avoid controversy.

I must warn you, though: I am very susceptible to flattery.

oh, I am laughing!

they DO still have those little rolls, they use them to make the chicken littles.

Hmmm, thanks so much, Velma! I'll see if they'll substitute a roll for a biscuit, sometime. Their biscuits aren't that great, but even bad biscuits make that cheap gravy seem like gutterwater. Now, those cheap rolls for some reason were a great foil for that cheap gravy. Then again, maybe my sense of taste is more refined now. I'll try it sometime and give a full report...

The headless chicken is indicative of the leadership of PETA: alive and kicking, but forever forgetting where they left their head and the sense they left behind with it.

As for Ms Anderson's advocacy, it'll prove to be a bust in the end. She'll probably think that's alright, not understanding the difference...*wink*

That last line sums it all up well.

I remember those rolls!

I'm totally buying a fur coat today. And if it weren't Friday (I'm Catholic) I'd stop off and get me some KFC on the way home.