Eager as I am to remove all doubt, you may have noticed on occasion that I mention my Ozark roots. I look at this admission as a bit of truth in advertising which may go a goodly distance toward a get-out-of-jail free pass with regard to my eccentricities and fetish for the outrageous.

One thing which is a hallmark of (not just hillbillies but of all) folk who live somewhat at remove from the mainstream of the social hubs, ordinary items tend to be transformed for uses quite disparate from their original intended purposes. As a child, I remember sitting in the back seat as we drove from Memphis to the hills to visit family. At one particular stretch along Highway 63 was a long bayou on the east side of the road, and miles of flat stretches of farmland on the west. Near the road here was a house where the owners had cleverly adapted up-ended old refrigerators into little chicken houses, with a porthole cut into each one to let the birds in and out. I wondered if the fridges kept the chickens cool during those sultry, oppressive mid-south summers. 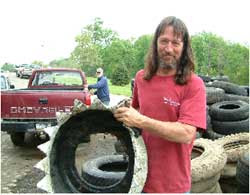 Up closer to the hills, one would see with increasing frequency a dazzling array of yard art. Tractor- and car- tires turned inside out with a zig-zag cut along the top made festive yard planters when painted in Easter-egg colors. Here's a photo I found on the intarw3bz of a gentleman holding a tire planter he looks very proud of. We're probably related. [How's this for shocking: Someday when I move out of town, I'm going to have a tire planter in the yard, but I'll bet my sister will beat me to it.]

Before the new highway by-passed the business district of Jonesboro, we'd stop at a little donut shop there and buy "crippled donuts." Yes, that's what they called them because it was the 70s and they was ingnernt. We were smart and bought the wonky donuts, because they tasted just the same. We were equal-opportunity diners.

So, anyway proceed farther into the hills, and my favorite places were the houses where they'd cut gills around the cylinders of old bleach bottles, fanned them out into blades and put them on sticks, where they'd gaily spin in rows along the fence line. Yard art! Trust me, if it's plastic and disposable, someone in the Ozarks has found a decorative way to use it. One of these days I'll show you the fork fans. (don't ask.)

Anyway, mom's got a cousin, a really sweet man, who is a bit of a wheeler-dealer. He goes to auctions all over the country and buys huge lots of bits and bobs. Once he got a massive cache of silver-plated flatware and serving pieces. Well, he had the idea to fashion these pieces into pendants, brooches, and that sort of thing. Very sweetly, he handed these mementos out to all the ladies at the family reunion.

This piece is a pendant he gave me. The big metal thing began life as a pie/cake serving utensil, and has become a rather large pendant with a dazzling array of festoonery. Yes, that's a poker chip you see with the cameo and glitter. I thanked him kindly, and slipped it into the pocket of my purse.

When I got home from the trip, I decided to carry a different handbag for a while, so I switched my things out of the bag, but I neglected to empty that one pocket.

About 2 months later, I had to go to court for a matter related to my job. I decided to carry the red handbag. [you see what's coming, don't you?]

I made sure to take my Leatherman out of my handbag, and I sashayed on into the courthouse. Incidentally, this is the building at Commerce/Main/Harwood where Jack Ruby shot Lee Harvey, fyi. So I climb the steps with my handbag and files, and I go up to the severe-looking woman at the post of the metal detector. I placed my handbag on the roller-table to go through the xray, and I walked through. I waited for my bag to come through, and another woman walked up and looked rather crossly at me, surveying, as she picked up the bag and brought it back to the entrance of the machine.

Suddenly, where there originally was one police officer, there now are four, conferring below hearing range. Um, okay.

Now, I have to say for the record that I'm a cream puff and obviously never up to mischief. Usually. Even if I am, I have a way of not looking suspicious, I think. But here these folks were, a veneer of growing levels of concern clouding their faces. I vexed.

One of the women called me over and said "Ma'am, do you have a knife in your bag?" I said "no, absolutely not. I do not." She said "I need you to open your bag, please." The 4 officers hovered, watching expectantly as I opened the bag. I showed her the contents and said "see, just paper and my wallet." She said "What's in that zipper pocket?" I said "nothing." I opened it up to show her and there, twinkling like a turd in the punchbowl was this little gem.

Immediately flustered, I began sputtering an explanation "oh, I carried this purse to my family reunion in May and my cousin makes these things and this was a pie-server but now it's a necklace and-- and-- and--." They looked at me as though I were stark-raving mad. I said "we're from the Ozarks." Suddenly, they understood and nodded, their faces suffused with relief. I suspect they've met a hillbilly before. I think they were trying to suppress laughter. I didn't bother trying to contain it and just giggled nervously like a ninny.

They waved me on through. The funny thing was that after all that hullaballou, I was not even nervous when I finally spoke to hizzonner. The lovely judge reduced my $800-ish fine to $35, and I told him I loved his train set as I was leaving the court. (He had an N-scale train set-up on a big table by the bench).


So, the moral of the story is to tuck away embarrassing gifts as quickly as possible, and to always compliment the judge on his marvelous choo-choo. 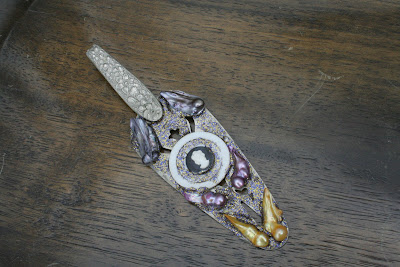 Anyway, that concludes my presentation.
Posted by phlegmfatale at 11:07 PM

Wonderful story! It reminded me of visiting relatives in rural Virginia back in the 50s and 60s. Thank you!

My grandmother had at least two of the tire planters...quite nice actually, all painted with white wash!

I'm from the hills of Tennessee...you know they must be kin!

Wow. Your pendant totally reminds me of tramp art - I love it! And "twinkling like a turd in the punchbowl" is now my new favorite expression.

I remember seeing the tire turned planters between Houston and Austin many years ago. Some looked kinda neat. The ones painted all white.

turk turon - It was a pleasure being your tour-guide down memory lane!

mushy - totally! Yeah, it was a cheerful way to contain flowers and recycle the old tires, eh? Yup, we're all related. I'm going to call that a beautiful thing, 'cause'n we're so cute!

breda - Yes! That's it, precisely - tramp art. Wow, it's a red-letter day when a brainy lass like you adopts an expression from me. *flattered, even if it's super classy turd references*

myron - Yeah, it was a neat thing, yeah? Why go to WalMart and spend $20 on a big plastic container when you could convert a used tire? Then again, I suppose the old tires didn't have the steel inside so often, so a plain rubber tire must have been easier to manipulate, yeah?

I don't want to know what all the blobular thing are...

They either look like insects trapped in resin, or cat turds. To me, anyway.

Oh, and you should ALWAYS compliment a judge on his choo-choo...I thought that was common knowledge. ;)

Ahem. The Ozarks got nuthin' on certain parts of Oklahoma and New Mexico when it comes to yard art, Phlegmmy. There's a guy here in P-Ville who has a windmill collection in his front yard... between 75 - 85 of 'em, depending on who you read.

Since I happen to live in AR. I get to see a lot of wonderful stuff. Like the commode in the yard down the street with an ivy growing out of it. You never know what will catch your eye around here. It's cool.

Hahaha! Twinkling like a turd in a punchbowl. That is hi-larious. I do have to add that this Ozark phenomenon is cross cultural. The first thing my grandmother did after she had a few bucks stashed away was to install chandeliers all of her bathrooms.

I've always been amazed at the ingenuity of the po folks in the hills. Love drivin' up through that country on canoe trips.

I love the "Oh, we're from the Ozarks," and that was good enough to get you through security with a questionable item.

I used the "turd in a punchbowl" line in my post today as well -- I just love that phrase.

Those little like little gold...um...naughty bits on the end of that pendant thingie.