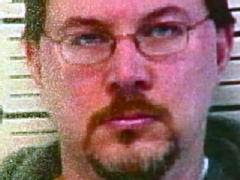 I'm sure someone will be relieved to hear that charges have been dropped against a Bellevue Ohio man who was caught on film having unnatural relations with a picnic table in his back yard. Apparently a neighbor filmed him on four separate occasions.

I'll let that marinate a while. I may be back later to make more crap comments, but for now, I'm kind of dazzled. What I wonder is why did the neighbor film that 4 times before going to the authorities? I can see documenting the event you are complaining about, and possibly getting two separate events on film to buttress your complaint of lewd public behavior, but 4 times?

Anyway, they still may bring some form of charge against him, but for now, the felony charges have been tabled.

It's a marvel he got off so easily. I would have expected him to have been sentenced to hard time in the pokey.
Posted by phlegmfatale at 12:19 PM

Did the table have a knothole?!

That's almost as bad as the guy boinking his bicycle, or the nightwatchman interfering with the pinata!

Anyway, wtf's up with the neighbor? Why didn't he just say, "Dude, maybe you should take that inside?"

Instead of making this poor guy a pariah and possible felon.

How do you find this kind of stuff??

Both of these people need help in massive amounts. Gross freaks!!!!

You have to wonder why he did not take the table to his bedroom if he was that fond of it.

What I want to know is why the neighbor didn't have the guts to confront him the first time. I would have walked over with a stick and beat it for him. The ingnominy of that encounter should have cured the problem in a public viewing arena at least. But as you suggest the filmer had more on his mind.

Wonder if it was the lace tablecloth that put him over the edge?
Maybe Frederick's of Hollywood should look into offering tablecloths and bicycle covers.

His yard, his table, his dork, his bidniss. If he ain't afraid of splinters... Unless there are no fences. If I want to see what my neighbor is doing to his table I have to stand on my table. Thankfully about all he's ever doing to it is spilling beer and barbecue sauce on it.

Gawd, but this is THE classic "don't ask the question if you can't stand the answer," innit? As in "how?" and perhaps "WHY?"

I'm with Myron. It's his own bid'niz. He really should have a privacy fence, though.

Lends new meaning to the term, "got wood"...

oh groan, dirtcrashr ... he was obviously a part of some splinter group.

That slut of a picnic table. You know it was asking for it. It probably had great legs, though.

Probably had a black lace tablecloth.

Sorry, but all the good puns were taken.

"It's a marvel he got off so easily."

In his defense, the table was rumored to be pretty hot. :P

Well, I'm glad to hear he managed to get a leg up.

Maybe the neighbour ran out of videotape. Otherwise he'd still be recording.

Well, at least now we know he won't spend his life pining away.

Oh, don't start, Phlegmmy! The root cause is that he went out on a limb to get off that easily. It may go against our grain but a man of that timber surely wood knot think so.

Like Cristina lmt, the Katlady was wondering if he used the umbrella hole or something knotty.

Oh ... and the problem with doing it in front of neighbors with camcorders is that it can definitely leave a very sticky film behind.

I think the neigbor should have been arrested as a peeping Tom. The article came from the Orlando WFTV.com Newsroom's daily email for "News of the Strange". Most are local, but some are picked up from around the country. Sort of like Chuck Shephard's "News of the Weird', which I don't see any more.

It wasn't really a picnic table, as I understand it, but was a round table bored through the center for an umbrella.

lin - there must be some award for cramming the most puns in one sentence. I applaud you. Not to go all sappy or anything, but as for the sticky film, it probably wood.

Well, apparently this was done within a certain range of a school, but I agree with Myron that if he had a privacy fence and was on his own property, and no picnic tables were harmed in the making of that film, well....

matt g - I suppose he liked to teak it to the limit.

I would love to join in here, but I just don't think I have the skrillz to top "...hard time in the pokey."

*hanging head in shame* I know, it was a real clunker - I couldn't resist.

Teak it to the limit? Son of a Birch,
wish I'd thought of that.
Perhaps the neighbor is related to
the woman who complained she could
see the neighbor boys skinny-dipping
in the creek. The responding deputy
went to the window, looked, and said
he couldn't see anything.
The woman said, "No, no, you have to
put the chair at the right side of
the window and stand on that."
Anon, Don

Somewhere, a lonely as of late picnic table dries its tears and dares to hope...

Hard times in the pokey?

I think he already had his pokey in the hardwood.

Did he use Pledge?

Maybe he was limp wristed so they figured hard time in the pokey would be fun for him.