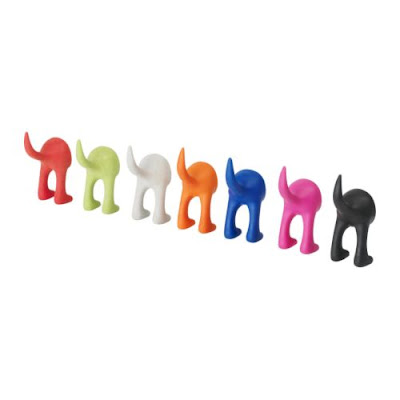 The name IKEA comes from the Latin and is discussed at length in some book by Dante, right?

I went to IKEA Saturday, and I must make a less-frequent event of same in future. Yes, they have some great values and some neat little items for the home, but they also have some cheap crap you'll wonder why you bought in about 14 months. I'm not slamming it totally-- I've gotten a lot of great things there, and I will go back. Most likely soon. It's just that I'd question the wisdom of buying some of their products.

Not so these delightful little wall hooks they call "Bastis" but I call Mutt-butts. They are $1.99 each. (I picked you up a few, Holly!) Anyway, They make the cutest hat/coat/leash hooks, and come in an array of fashion colors.

If you haven't been to Ikea, be prepared for a massive place where you'll come to know the angst experienced by manifold millions of cattle in Amarillo feedlots. You and fellow travelers are sluiced around a staggering array of model rooms on a little tile lane wending its labyrinthine path through the bowels of he-- er, Ikea. There are are false walls which divvy up the showroom floor, with occasional shortcuts through, but they change the shortcuts periodically to reduce the likelihood of you getting in to pick up the one item you want and getting out with any degree of efficiency. Yes, I'm the little rat that memorized the maze shortcuts on the first visit. I usually spend longer in line waiting to pay for my stuff than I did making my selections.

My biggest complaint about Ikea, though, is the customers -- you've never seen such a slow-arsed, directionlessly shambling lot of people. They obviously are experiencing some sort of sensory overload, and they just can't quite take it all in. I've seen people less awe-struck at the Grand Canyon.

Oh, and a big, cheaply constructed warehousey people-magnet thing in the middle of tornado alley??? -- hands-up, everyone who agrees with me that this is really tempting fate. The only way they could be MORE asking-for-it would be if they festooned the roof with disused tractor tires. Once recently I sat on a sofa to see if it seemed like $XXX of posterior delight. To my horror, I could feel the floor vibrating in percussive little waves. Creepy. That made me remember that my sister told me about working retail on the upper floor of a mall. She said she could feel the floor tremble constantly, and that she'd look at the bottles of liquid product and see tremors in the fluid. The thought of these buildings (I'm sure they're sturdy enough, and all, but jeez!) being rather flimsy to that degree does not inspire confidence, does it?

I still detest shopping centers. They don't call them "mauls" for nothing. I hate having to walk past 20 stores that annoy me to get to the one store I actually came to visit. Anyway, Ikea is big enough, it feels like you've been to a mall. I'll bet their employees have nightmares the rest of their lives about the smell of cinnamon rolls and Swedish meatballs. Serves them right for acting in league with Lucifer.
Posted by phlegmfatale at 11:08 PM

Those are fabulous. We don't have an Ikea here, more's the pity. I hear they're great.

I WISH there were an Ikea in Vegas.
Most of our stuff when we lived in Germany was from Ikea, and I loved it!
Those hooks are so cute, I love all the colors.

See, if Vegas had an Ikea, I could go there and then blog about whatever horrific experience I had...win/win!

I first went to Ikea while in Germany.
Ikea has a lot of neat stuff, but I am leery of furniture made of laminate.

The mind is a strange thing...I'm sittin' here wondering if "cat people" see those as "cat butts" rather than "mutt butts?"

"...and that she'd look at the bottles of liquid product and see tremors in the fluid."

HA! I bought a handful of those dog-bum hooks last time I went to IKEA. Still haven't used them yet, but they are cute.

I'm sure the socail planners who design IKEA stores will be called upon to make zombie traps in the coming Zombiepocalypse. I swear, if you're not really good at paying attention you're going to get trapped looking at the same damned displays of attractively priced chairs, stools, and clever-yet-familiar household gadgets for hours without finding the way out.

We bought a bunch of these. They came up on the receipt as "Dog Ass"

I couldn't agree more, I can't stand going to IKEA because of the crowds and stupid people. It's like the entrancet to the store removes most peoples' common sense.