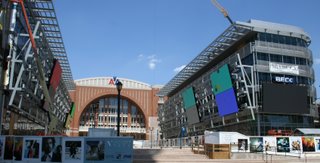 This image will be going up on Dallas Diorama soon, but I wanted to go ahead and post it here while blogger is still cooperating with the photo thingie.

This is the South (Downtown-facing) facade of the American Airlines Center. When I took this photo Tuesday afternoon, the posh new W Hotel was directly behind my back.

The 8 or so screens you see being tested are just the first of dozens of giant video panels that will be going up here. As I've driven by recently, I've been riveted by these giant blocks of color, with blips of wrong color in the middle of the fields. Every day each panel is getting more accurate, and I drove by again later and a man was on a crane with a big panel opened in one of the screens, presumably correcting the connection.

The tilted facades will be entirely covered in these panels, so this will be Bladerunner world through here. Coolness.
Posted by phlegmfatale at 5:08 AM

Damn, are you getting paid by the city or what? Seriously, you need to get some pictures of the older shops and houses over in lower greenvill, turtle creek and shit.

Honey, I have another photo op for you.

I so have to remember my camera tomorrow morning!

my breath is baited.

fathairybastard - There will be grot aplenty, I assure you.

nongirlfriend - I'm just so excited about Buck & Ruck that I can't stand it.

tickersoid - You are easily excited, but that is one of your charms...

Hmmm... I'm definitely gonna have to go and check that one out.
FHB may have a point!

Oh, and fathairybastard - Nah, I'm just close to the area every day, and there are some kooky one way streets that make me have to drive by that spot to get where I'm going in town a lot of days, so it's grabbed my attention. Keep in mind that I'm a short-attention-span princess and flashy colored things hipmotize me.

big dick - more to come. I'm posting daily (at least for now) over at Dallas Diorama. I'll post some of those pictures here, too.

I just googled pattye johnstone, and I ended up at your blog. Pattye was my voice teacher at UNT back in the early 80's. She was the best voice teacher ever (I have had 8 and have accompanied for many more!) even though she could no longer sing (stupid cigarettes!). The last time I visited her was in about 1986, and I was so saddened to hear of her passing. I wanted to visit her again!