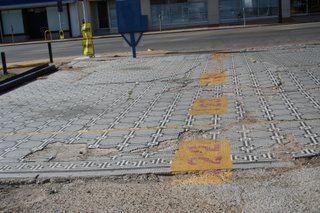 I took this photograph downtown this weekend. This has always fascinated me, and later on Dallas Diorama, I'll post more photos of this parking lot. It's at the corner of Main and Harwood Streets downtown, and is a mere block East of the Municipal building which was the Dallas Police Station until about 3 years ago.

This was apparently a store somewhere along the cusp of the 19th and 20th centuries in Dallas. This former indoor floor is composed of white, gray and charcoal colored square tiles, which seem to be cement tiles, rather than a porcelain or terra cotta. Their finish is quite matte. The entire floor is bordered by the Greek Key motif you see at the foreground of the tiled surface.

Of course, it's a pity that the building containing this floor was razed lo these many decades ago (before I was born, most likely), but I love the fact that the floor remains, even though little bits have flaked away and depressed areas have been leveled with paving materials. It's one of those little poignant reminders that we're all just passing through.

Oddly enough, this very lot has had a little bit of history pass by its threshhold. If you can see the word "lift" in the upper right corner of the photo, here across the street is where until recently a WesternUnion office stood for many decades. It was in that very office that Jack Ruby went to wire cash to a down-on-her-luck stripper in Oklahoma (she had formerly worked in one of his strip joints in Dallas), immediately prior to going over to the police station to kill Lee Harvey Oswald.

I wonder if Jack Ruby parked at one of those parking meters? Or maybe on this very lot.? Somehow, it seems incredibly callous and anticlimactic that these tiles are spray painted with parking space numbers. 122, 123, 124. The timeless march of repurposing.

...There is a light at the end of the tunnel for my computer woes. I have ordered a MAC and expect it to arrive by the end of the week. Glory glory to the day of my deliverance!

Then I should be able to be a better correspondence, as well as being more diligent in my rounds to drop off my grapeshot of pithy comments. Ciao!
Posted by phlegmfatale at 12:05 PM

What a neat little spot of history.
Good Luck on your new puter.

That so belongs in the Diorama.

You see Dallas in such a different way than the rest of us.
This is a very good thing.

That picture grabbed my attention. I like it for some reason.

Photographs like that transport me. I think a part of my mind is always looking out for visual non sequiturs. This is perfect. Perfect.
And I understand exactly what you mean about it seeming "callous" to spray paint numbers across the floor.
But even that is a non sequitur...and interesting.
Absolutely GREAT photo.
And congratulations on your new Mac!

Hiya Phlegmmy - long time, eh? Glad to see you're still up to your usual tricks. :-)

Coolness! I love architectural schrapnel. And a historical story to boot.Congrats on the new Mac. A friend of mine just got one too. Glory to you indeed!

You know, it looks like a Roman mozaic floor at Pompeii or something.

patty - thanks for the well-wishes - the mac has GOT to be better than the sad old turd I was using before!

nongirlfriend - and very soon, it will be!

dick - aw, shucks. It's just that I'm not wasting my time with useful occupation, so I fill up on trivia.

rocky (racquel) *SQUEAL!* You disappeared so with heavy heart I removed you from my blogroll - glad to see you back, and yeah, I'm up to the usual mischief!

schnoobie - well, someone needed to sing the praises of this forgotten floor! woohoo.

fathairybastard - yeah, I kept thinking of the preserved mosaic floors of antiquity that have been purloined and put up piece-for-piece in the British Museum. Good stuff.
Which the countries of origin should thank them fore, thus ensuring said treasures didn't end up on the black market or worse yet, destroyed.

It always amazes me how we seem to deface and discredit our cultural heritage Phlegm.

They should try to save those floor tiles.

ben - well, I have learned to be a bit cynical about preservation - when an architecturally or historically significant structure is on prime real estate, the significance is not what's held at a premium. Actually, I'd like to pluck them up and tile my garden with them. Or all my bathrooms. Or, they'd definitely cover my living room.