[This post originally written some months ago, but lacking a careericidal urge, was postponed until this august hour. ]

Hmmm... how to tell this story?

Due to *ahem* professional obligations and life's circumstances, I am compelled to weekly sit in a meeting which very often involves the stripping of hide from my fair person. Yes, it's a sick, dysfunctional arrangement and I won't always be here, but for now that is the way it is. This must be endured, and for all its tediums and embuggerances, I do enjoy some definite perks... For the moment.

When there is good news regarding my work performance, it is generally preceeded by a sound cutting-off-at-the-knees. This, of course, serves the purpose of letting all concerned know they be but lowly worms and pretty much unworthy of high regard. I have cultivated a bland poker face in which I strive to not react to the sheer assholery being served me. Best not to react at all. There is a method to this madness - I think the person believes they are helping others to improve- that one should never rest on one's laurels, even laurels as fetching and finely-crafted as mine own. *pah!*

Tuesday, however, brought a turning of the worm I could scarce have imagined. Near the end of the meeting, the scornful one took a cell phone call. I heard their voice ratcheting up, stress building. The brow was knitted then promptly dropped a stitch, storm clouds billowing up behind the ears as the rage burst forth great cottony tufts. Someone was being torn a new one. Someone was very unhappy about the harangue they were being served courtesy of the caller.

I had to fight not to giggle, oh my darlings. It was magnificent. Steam! Steam billowing from mouth, ears and snout. I pulled my elbows tight to my sides, willing the giggles not to escape my aching ribs. [think, phlegm: dead puppies! tax audits! unpleasant-smelling things! don't laugh!]Good googly moogly, I was dying to laugh. Would I have to do myself a harm? Dig my nails into my palms? Pluck nosehairs, even? (not, of course, that I have any nosehairs, but...)

I was strong. I did not laugh. I was, however, smugly bemused. 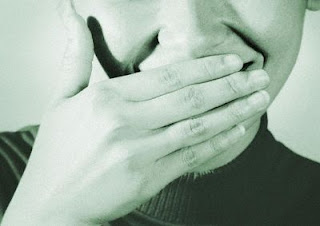 I wasn't as good as you were in a staff meeting before my supervisor retired which probably explains why I didn't her job when I was the only one qualified for it. That and pointing out to the executive director that he was a moron (much more politely than that) while he was talking to a repair man who was annoyed with the exec director because he was told by him that his repair job was working wonderfully when it wasn't working at all.

Anyway, my supervisor in the meeting got on a tear about a written plan we have to write annually and she started telling us how terrible a job we did forgetting the fact that every single word in it was approved by her -- and there were lots of rewrites to satisfy her. She finally turned on me and I assume the whole point was to get at me. She said that particular section was the worst written piece of crap she'd ever seen and looked at me and asked/accused, "you wrote that didn't you?" I replied that she wrote it and pointed out her catch phrase in the document. She had the nerve to continue and went into a couple more sections not accusing directly but finally got to "I want to know who wrote that". Her in both those cases. And of course I was the one that had to tell her she did.

While I was always polite about it, I didn't care if I got fired. I did know that they consider me indispensable (nobody is, just an issue of how hard it is to replace the person) so I could get away with that. They like what I do for them but they don't appreciate it and don't understand they don't appreciate it. After all they gave me a 20 year plaque which was the extent of their appreciation". I've always felt that appreciation is shown by occasionally telling the person so privately and publicly. Certainly doing a general "I have the best staff" and calling them out by name but leaving me out - 3 different times - isn't showing it.

Consider yourself lucky to be gone. I will be retiring in 2 months and everyone is sweating it but not enough to learn to start doing their own jobs, much less mine since they don't intend to replace me. They don't understand 2 1/2 years of "I'm not available for free or for a fee. I'll talk fishing when I'm gone if you want to call but not work."

Spell-check wants to change it to "protuberances".

Beautiful: rage burst forth great cottony tufts.I once had a boss like that working for the Big Shiny University, constantly "improving" people with her PhDoctoral wisdom.
Putting up with that shit is not worth the heartbeats.
I was so glad-glad happy-happy when her vast intellect and talents became inescapably necessary to an outside "agency" that expressed a need AND desire for her - and to which she pompously with feigned grace and vast hubris gratefully stepped-up.
Only that ONE thing. Everybody knew that it was a third-rail, a step off a cliff, a snake-pit, and the *agency* was a brutal meatgrinder perfectly suitable for chewing up even a thick-skinned dumbass snot-head dragon like her. And it did. Yay!

AH yes, Karma, it's a REAL bitch when it bites one square in the butt...

Phlegmie, I'da had a party that evening (alone or with someone, wouldn't matter) and rolled around in the disclosed stupidities of that "higher up".
Pomposity deflated. Way to go, girl.

You did much better at I would, I wouldn't just be giggling, I'd be openly gaffawing.

Well, as they say, shite runs downhill. Still, must have been fun.

Once upon a time, I had a particularly enjoyable month-long workshop at NASA in grad school. My paranoid, insecure boss had demanded "written progress reports, twice a day" during the 4-week proceedings. Same idiot had breakfast with me afterwards to discuss the outcome. When asked what I thought, I said that we did good and I learned a lot. He proceeded to try to ruin the experience by raging about, "I don't want to hear about what you learned, I want to hear what they learned from you!" And so on. I was about to lose it and do jail time for assault when I saw that a bird had thoughtfully pooped on his head. I just focused on that, calmed down and survived the meeting. Perhaps a bird will do you a similar favor.