A woman I know called me up recently laughing her head off. She'd seen a commercial on television where a guy mistakenly brushes his teeth one morning with buttpaste instead of the tooth variety. Her young daughter asked what the paste was, and she explained. Then the daughter said "Oh, that's what daddy had me buy that time." She asked for an explanation, and learned that several years ago when she had sent her husband to the drug store for some Preparation H, he'd been too embarrassed to buy it, so he sent their daughter into the store to buy the stuff.

I know a woman whose ex-husband made great sport of occasions when she'd drop *ahem* ladytime products in the shopping cart. He'd take it like a football and run down the aisle, throwing the box back at her while yelling "go long!" 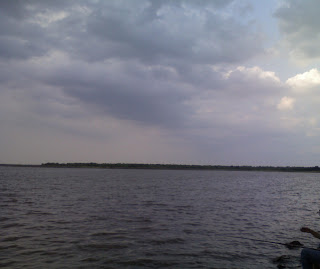 Went fishing Sunday night, and the sky was overcast and things cooled off nicely. The lake was windy and I fished with a crappie pole from the shore. I used some stinky discoball bait blobs with red glitter, but the fish stayed away in droves. My hook was robbed aplenty, but no fish would I catch, alas. I think the sparkles would have worked better if the sun had been brighter, but I was happy with cooler dimness and no fish than I would have been to catch a passel in direct sun and brutal heat.
To my dismay, I was informed that I don't get a refund on my fishing license if I never catch any fish. *harumph*
Posted by phlegmfatale at 12:01 AM

Crappies are weird fish. They will nibble away at bait and not take the entire thing in its mouth IF you just let it sit there. If you did a slow retrieve and not gave the crappie a second thought about chomping down on it, you would have hooked crappie aplenty.

Some guys can be really juvenile about "body products" can't they? I have 4 Brothers and they were touchy about feminine hygiene items. Even the one with 3 daughters refused to buy them.

As they say, a bad day fishing is better than a good day at work.

Try a tiny hook for the crappie.

holly - not judging anyone, but I would never send a guy to buy stuff like that for me - I figure we shouldn't worry their purty little heads with such stuff.

gator - that's a saying for a very good reason!

anonymous -i'm with ya

Never quite understood the problem certain males have buying feminine problems. Someone looks at you funny, that's their problem, not yours.

Now, guys, you want to have fun and raise eyebrows? Go over to the, err, family planning section, and muse, loudly, "Hmmm. They have special condoms for the big guys, but nothing for the little ones!"...

I've never, ever had a problem with buying 'female' products.

Silly, don't you know that the kids are the ones that catch all the fish.

I've been married eleven years, and I've bought just about everything for my wife.

Although for some things I may have to grab a gun magazine just to polish up the image a bit.

I don't think it's a big deal. It's just another part of life, no? Still, I do all my own shopping anyway.

The lake looks beautiful and very peaceful; wish I could have joined you, since it's a hot, sweaty madhouse here in Vegas.

No refunds?! I second your "harumph"!