Have I got shoes for you...

I'm concerned about a friend of mine. She's obsessed with shoes. In a fit of pique she vowed last September not to buy any shoes until 2009. She stuck with that vow, and even though her first purchase of 2009 was a sensible pair of shoes, I wasn't fooled for a minute. In recent years, she's spent the equivalent of some lesser-developed nations' military budget on play-pretties for her feet. I'm worried her mortal soles are in peril.

She once stuck to finely crafted, well-wrought shoes with very classic lines and impressive pedigrees, but lately her tastes have run to gladiatrix space hooker. *shudder* Recently she actually tried on a pair of orange patent leather platform clodhoppers with lucite heels that would have scandalized RuPaul. Srsly. She cooed and fondled these horrors publicly, and I 'bout dropped my transmission when she put them back on the shelf, dismissing them as "impractical." What is to be done with such a one? 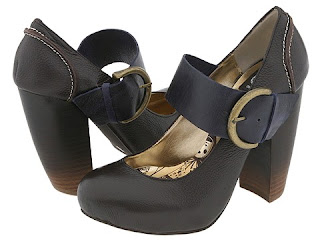 of platform Mary Janes from Dolce Vita. How do I reel her in, Abby? How do I persuade her that her footie thing is a cry for help, that she should eschew the nosebleed platforms, come back to earth and heel herself?

Sincerely,
La Phlegm
Posted by phlegmfatale at 12:01 AM

It appears your friend has become a victim of the the "impractical pedivulnerabalentitis virus". Perusing your blog, lends me to believe this untreated PVBV your "friend" has contracted has gone on to long to be successfully treated. Your "friend" is probably going to be fine, provided no one interfere with her PVBV. Indeed it would be in the best interest for any gentlemen friend of hers to indulge this condition and accept it.
-Abby

I think your, ahem, "friend" should embrace her inner Imelda Marcos and indulge her shoe fetish.

I was quite distressed at the reading of your letter. I applaud your concern for your 'friend' and believe that I have the solution. Recoil therapy, it's all the rage, used to be shock therapy, until a study showed that recoil always left people happy. Let her shoot, and perhaps she will give up her taste for impractical shoes and buy more gunny things.

Hm. Where have I seen those shoes before?
Elsewhere PhD

Tell her to hold out for lucite heels with live goldfish swimming in them.

I'm with AD. Your "friend" has held out quite long enough. She needs to come back to the fold and encourage my own unhealthy compulsion.

Phlegmmie, if your freind likes 'em, why not? --Trendsetter or cautionary example, _someone_ has to do it! ;)

(I could not possinly wear these. Dammit).