Rosanna Arquette seems to be playing some bizarre game of musical chairs, landing on random musicians as she goes. I suppose famous people don't want to date normal, mere human persons, so I can understand the rock star thingie. I know we're talking about a span of 25 years, and stretched out over that length of time, 3 rockers doesn't seem like that big a habit. Then again, they say when you've acquired 3 of anything, you are officially a collector, so on with the rant:

In 1982, she was dating a member of Toto who immortalized their relationship in the song "Rosanna." [Yeah, I'm wishing I could get it out of my head now, too. Sorry.] No ideer what happened to their relationship, but I suspect Toto was crapping out just about the moment RA's star was in ascendancy, and ne'er the twain would meet again.

Upping her cool-quotient exponentially, she was involved with Peter Gabriel from 1988 through 1992. PG even appeared in one of her films (New York Stories) and she wore an Amnesty International t shirt in one scene -- a cause also quite dear to PG's heart.

As for the Toto thing - flattery on a massive scale is nearly irresistible, I suppose. She was young and, well, why not? Peter Gabriel is charming, attractive and seems to have a well-functioning brain-- what's not to like? On some level, both these relationships were understandable. It's the new thingie that sort of baffles me.

Recently, Rosanna has been linked romantically with Paul McCartney. That's just... um. I dunno what that is. Maybe it's the money. I guess 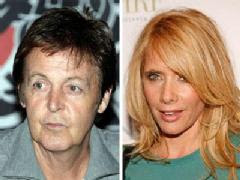 s a billion pounds might turn a woman's head, but. Ew. He's a hot favorite over at MenWhoLookLikeOldLesbians.com. It's not just that I'm not a huge fan of PM, even though I admit he's written some wonderful music (and put out a lot of crap that he really needed to make up for, frankly), but my skin crawls when people out of their 20s employ the moue as if they still look young, fresh and coy. Paul baby, Paul! Bubbie - when you go all wrinkly about the lips, it just looks trout-pouty. Stop it. Stop in the name of love. No more pouting. You're a grandpa, for goodness' sake.

Yes, of course, many songs PM wrote were stuff of genius. Still, I reserve the right to hold a grudge for Junior's Farm and many Wings-related wig-outs. Even if I do dig how much Linda looked like Scary-Monsters-era Bowie in that vid. And her hair? It's a shag, baby!

Back to Rosanna and Paul: I don't think the age difference is so terrible - less than 20 years. I can't quite put my finger on why this weirds me out. Is it the 6 degrees of separation double-whammy bit Paul has going on with Michael Jackson there? (MJ was married to Lisa-Marie Presley who was married to Nick Cage who was married to Patricia Arquette, RA's little sister) and PM also recorded some crap with MJ, Don't waste your time; the dog-gone girl is mine and prolly some other stuff. Also, before his legal unpleasantness, MJ owned the entire Beatles catalog. I'm just wondering why everything comes back to Michael Jackson in the end? Can't we get away? Even Michael Jackson doesn't want to be MJ - no more drip-curls, all the self-loathing-generated surgeries, and lately the self-pixelation. [Hey! Remember when MJ wanted to buy the skeleton of John Merrick (the Elephant Man)??? Just thought I'd remind you. ] Wait, that was a ramble. Sorry.

Oh yeah, I will go on about this, but on some level I'm in ecstasies. If you really think about pairings of celebrities, they come up with much kookier couplings than we could ever devise for them. I suppose we should thank them with unswerving devotion. Instead, we will continue to view them as the slo-mo recurring trainwrecks they are and thank our lucky stars for the instructive properties of the cautionary tale.
Posted by phlegmfatale at 2:29 AM

They have so much money they don't care who they marry or the results.

Hollywood is the land of the crazy rich and have their own laws, which leaves us to be entertained no matter how yucky it is.

Heya, I emailed you about the New Year's Day party we're having. Hope to see you!

MenWhoLookLikeOldLesbians.com? Oh how perfect, and I do believe that Paul should be their poster boy. What a perfectly delicious bit to read this morning.

I will never forgive that man for being responsible for spawning the worst band in the world - Wings.

lainy - I spose. Entertained, or looking on in horror!

liz - yuppers - sorry - wasn't sure until just last night if I'd be going, so I held off responding to the invite - I'm sorry - that was rude of me! I'll be there, hon!

barbara - Yup, that site is wickedly delicious. I dunno, though, McCa may be vying with Bruce Jenner for top honors. Yeah, Wings *shudder*. Yuck.

That's not so bad. I still think the most bizarre coupling was Michael Jackson and Lisa Marie Presley. Deeee-SGUSTING!!!

Woah! You are wayyy better than that sunday magazine I used to get in the paper.

Paul Mcartney like you said had some great songs but he wasn't very deep without John and George.

Then again, they say when you've acquired 3 of anything, you are officially a collector...

Which is precisely why I'll remain single until my dying day. I refuse to be known as a "collector of ex-wives," or, alternatively... a three-time loser.

re: age differences. FWIW, the accepted formula is "Your Age, divided by two, plus seven." So...in my case, it becomes tacky should I have a thing with anyone under the age of 38. I don't think I'd go that far down the age ladder in any event, anyway. Not that a 38-year-old woman would consider it to begin with. I'm NOT Paul!

I have NO idea how old either of these two are and am not predisposed to doing the required googling.

I don't know why I'm so fascinated by celebrity hook-ups, but I am. I guess they kind of look strange together b/c even though it is less than 20 years, it looks like a wider span. Paul is just looking plain old nowadays.