Wow. Tuesday was SUCH a great day for a whole bunch of reasons. The germ of an idea has been kind of growing in the back of my mind for a little while. I've been hankering to get a pair of cowboy boots. Well, cowgirl, anyway. I got a pair of Dingo fashion boots when I was in high school, but that sort of doesn't count. I also got a pretty nice pair of used boots that fit perfectly about 15 years ago, but those boots were never the same after I chased my dog into the surf in them on a beach in California. (I don't recommend it.) Anyway, I might be singing somewhere in the near future, and the combo I'd perform with is country-oriented, so I thought why not celebrate this groovy, beautiful cool day in which my sinuses feel so much better by going to look at boots that I could maybe wear onstage.

I went in the place and *sigh* *gasp* I said THAT's it! THAT is my boot. That's the pair for me. Alas! It was not to be, for an $899 pair of Lucchese was simply not what the wallet goddesses dictated today. (btw - for you furriners, that's pronounced Lew-casey. Even alluding to fromagerie is a hanging offense down here, fyi) 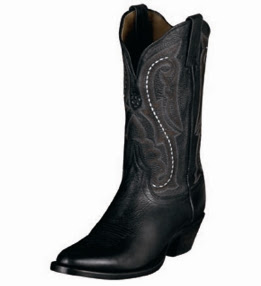 I settled on a modest but still cutely (?) stitched pair of Ariat boots in black leather that fit my feet perfectly. There's a really nice grain to the leather and the toe is pointy, but not too pointy. It's a rounded point. Whatever. Anyway, here's a picture. YEE HAW!

I left work in the thick of rush hour and picked through the back streets to Western Warehouse on Stemmons Expressway. They have those ginormous plate-glass windows where you can see out onto the freeway and all the miserable people stuck in cars. *smug mode* Why drive when one might be trying on footwear? It was very western zen, in a way.

Anyway, as I kept unwittingly choosing the expensive boots, the guy finally said "you have really great taste!" I said "yeah, but unfortunately, I can't afford my taste right now, I just need a basic black pair of boots." So these caught my eye, they feel great, and he said "they look incredible with that skirt, actually." Hmm, cowboy boots and black silk georgette? Yeah, I can fight through that. Actually, the edge of the skirt is not ruffled, but it is kind of sinuous and fluttery, so it really did work with the boots. I didn't want to leave them orphaned in the store, so Thelma and Louise came home with me tonight. Went out to grab dinner, and I thought going to get good barbecue is probably a good way to celebrate a new pair of cowgirl boots, so me and Thelma & Louise went for some pulled pork over at Dickey's. (that sounds wrong, doesn't it?) Anyway, I was so excited I barely touched my beans and dill tater salad.

Yee Haw, people! A day you get a new pair of boots is a very good day. Actually, in a way, I was also sort of celebrating two of the best days in a row at work I've had in a very long time. Things are going well, and I'm feeling better physically, too. By better, I mean not just better from the recent allergy/sinus thingy, but the best I've felt since I got pneumonia. YIPPEE! Maybe I sweated the last of it out at Gogol Bordello. Who knows?

Have a great day!
Posted by phlegmfatale at 1:39 AM

Glad to hear that you are feeling better.

Strange how "retail therapy" can have such an uplifting effect on some ladies.

Oh, I'm so wearin my hot Lus to your show. We need to take a roadtrip to Ravensden Ar and hit the bootshop. Love your new boots! A

Boots are good for your arches however, never make the mistake of wearing new cowboy boots for more than a few hours at a time until they are broken in.

sis - cool! Yeah, loved that store - they were cool folks.

hammer - really? I didn't know they were good for the arches? Interesting. Yeah, I've planned to only wear them a short amount of time the first several outings.

It's fantastic that you're feeling fantastic (it's about time, dammit)!

Love the boots, and at least you don't have to perform wearing high heels (like Tina)!

Nothin' like a new pair of boots!! The next time you hit the road towards Hereford, Phleghmmy, go the extra 45 minutes west to Clovis and Joe's Boot Shop. I think you'd like browsing there, even if you don't buy. I mean...what's NOT to like about 16,000 pairs of boots?

(Joe & Co. appear to be Luddites of a sort...the link is to an old cached page.)

While I'm glad you found a great pair of boots, it kinda spoils the outing I was gonna invite you on this weekend. I was gonna suggest a trip to Justin and then Nocona [if necessary] to look for boots. Oh well, sweet potato fries, perhaps?

Nice boots. I bought a pair of Ariat's chukka style boots a few years ago and wore them to an absolute and total death. Without a doubt, they were the most comfortable chukkas I'd ever owned.

Since I've got a weird foot (AA/AAAA width, absolutely no arch whatsoever) I had a pair of boots made at M.L. Leddy's over in the Stockyards. Best money I've ever spent on real footwear.

Glad you're feeling better. When are you going to make that trek to Ray's Hardware, anyway?

I am so jealous! I need a good pair of cowboy boots - or cowgirl boots - JUST BECAUSE!

So what gun are you gonna get to go with the boots? More retail therapy!

Those are truly lovely - our cowboys will be chasing you around the corral.
Thirty years ago, Mark had a pair of Lucchese made (in elephant and cowhide) because of his ultra narrow width. Apparently my cooking put some meat on those skinny foot bones of his and the boots pretty tight now. Do you happen to know a good foot diet?

I have one pair of brown boots, that when I wear them, it's the equivalent of a 10 gallon hat. I feel like I can take on the world.

On another note, one that any of you could appreciate. Getting said new haircut, I decided to take a new photo, one sexy and sultry, that would stir the hearts of men, So I put on the makeup and the lipstick and fluffed my hair and posed for my digital camera. I do look sexy and mysterious and sultry. You can ALSO clearly see Yogi, my black lab, right behind me on the couch licking his balls.

Those are lovely boots! Who needs the 3 million dollar pair?

Schpankay!!!!Lovely little bootsies .I don't know WHY but I just assumed you had a whole arsenal of cowgirl boots already! go figure! Them's real purty! I thought of you whilst I was browsing the cowgirl boots online at Zappos. I too fell in love with a pair of Lucchese.Girls got a natural born right to dream about some footwear, ain't it?

Ooo, now you can stopm out the bugs in the corners of the room. Sweet boots.

So, so, did you have a gig? Was it as wonderful as I'm imagining? Did you get a hat, too? or is it an overkill?