I don't know why it didn't occur to me yesterday, but I just realized that for those of you who only know the typical mosquito, you can't have a sense of scale from the cranefly/skeeter photos I posted yesterday. I'm going to operate on the assumption you all have a sense of the size of a plain-jane ever-tormentin' mosquito and simply post a picture of a Cranefly that gives some sense of their real proportion: 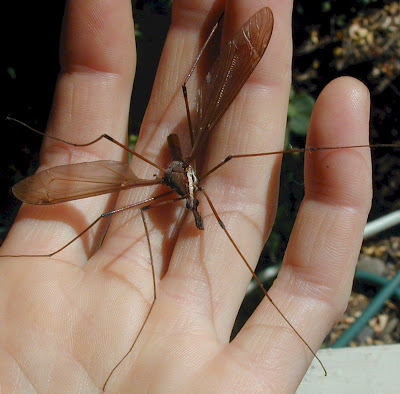 I've told you about the company owner being a total jerk to me recently. Well, after he was such an asshat, I decided the sensible thing was for me to follow my own instincts and stop waiting for permission of the powers-that-be when actions need be taken. Anyway, I made a decision and set it in motion, and my boss (who has ever been my champion) was upset at me for my choice. She asked me about it and I defended my decision. I worried that I'd irrevocably damaged the trust she had in me. I called her at the end of the day and said I was sorry and that I wish I had presented my case in a different way, and she apologized for her reaction. She said she saw that my choice was the right thing to do, and she said "sometimes when the general is wrong, the corporal has to take action." Anyway, it made me feel so much better after a day in which I really worried I'd been diminished in her regard. In a strange way, it made up for all that other recent unpleasantness to know that despite her instincts to the contrary, my boss could consider my view and support me therein.
Posted by phlegmfatale at 2:21 AM

Congrats on taking a stand at work! It's been more than once that I had been quietly called a butthole as I walked away from a boss but they were also the ones who later remembered me as being one of the few employees that they could trust and rely on. That's a real good feeling down the line.

I used to see a lot more of those things when we lived in Ft. Worth. Not so many down here, for whatever reason. We've got a shit load of crickets down here. I used to hear that those things ate skeeters. Wonder if that's true. I know dragon flies do.

Good news about your boss.

But what is bidet-boy going to have to complain about now?

Maybe he will get "depressed" and leave :)

I was always an independent sort but when I was made a pipeline district manager and my boss in the head shed was 150 miles away, boy did I have fun. It has always beene better, in my opinion, to ask for forgiveness than beg for permission, as they say.

Okay that cranefly is way larger than I expected. Insects the size of one's palm are certainly cause for alarm.

Well done on the job front, you rebel!

Keep on truckin' at work, your boss sounds like the kind that will support you no matter what, so you do what you know is right!