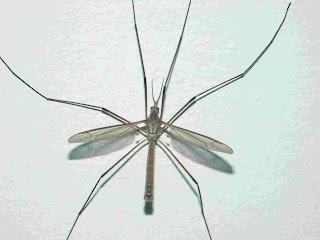 We have a huge kind of mosquito-looking thing in the south called a cranefly. Grandpa told me they were "galnappers" and that's what I've always called them. Several times recently, though, I've had people tell me they were male mosquitoes, and I didn't think that could be true, so I just looked them up. 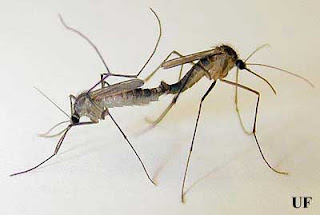 Craneflies don't bite, and neither do male mosquitos.

The picture on top is a cranefly, and the bottom one is a boy and a girl mosquito. The boy is on the right. Anyway, it just seemed funny to me that some people believed two such dramatically different-sized insects belonged together. In any case, they are all icky, but I'll take the craneflies over mosquitos any day.
Posted by phlegmfatale at 5:01 AM

We call them Daddy Long-Legs over here, and mossies are a real pet hate of mine.

galnappers, i love that..around here they call dragonflies skeeterhawks, i had never heard that before i moved here.

That's one thing about Vegas I like...no mosquitos, fleas, or ticks because of the heat and lack of humidity.

Though skeeters are beginning to become a problem, simply because too many people are letting stagnant water accumulate. I don't know how long they survive, though.
And we've had two/three cases of West Nile, too.

I always heard them called mosquito hawks. And the(snark)very reliable(/snark) Wikipedia says this about them:

"Numerous other common names have been applied to the crane fly, many of them more or less regional, including, mosquito hawks, mosquito eaters (or skeeter eaters), gallinippers, gollywhoppers, and jimmy spinners."

Daddy long legs is a spider...right?

Anyway, thanks for clearing that up, I've been too lazy to look it up!

They sure are leggy bastards, anre't they? As long as they don't bite, I'm okay with them.

Dang. Christina beat me to it...on two counts: bug pr0n and "no skeeters due to temps/low humidity." Same-O, Same-O here on The high Plains of Nuevo Mexico. But we do have a few, and a couple of cases of West Nile, too.

I need to get out earlier in the day.

I always wondered what those were.
I figured they were giant slow mosquitos all this time

Normally everyone beats ME!

Finally! Someone else besides my family who calls them galnappers!!

One of the comments mentioned daddy-longlegs. For us, daddy-longlegs are something else; giant spiders that I guess aren't really considered spiders.