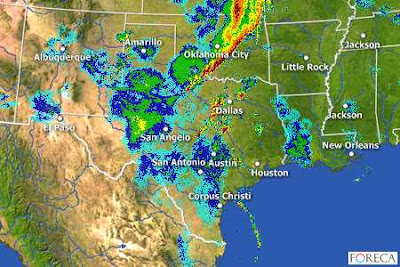 My favorite!
Posted by phlegmfatale at 5:11 AM

Run for cover! How'd it all turn out? On TWC, it looks like the front line is just about to pass over Dallas. I assume there was rain lastnight, too. Sherman to Texarkana looks like a mess right now. Keep your powder dry!

We haven't had a good thunderboomer here for months. I'm jealous.

tam - I think we've been getting your dose of storms this year as well as ours. I think this has been a record rainfall for N Texas, actually. I promise to enjoy it enough for both of us.

We rarely get good storms here, and when we do, they're gully washers that leave roads flooded and traffic snarled even worse than usual.

Enjoy 'em while you got 'em!

Have you ever had to run for the root cellar? That'll take the fun out of a storm quick.

No shortage of wooly weather in your area, by the looks of it. Have a blast!

...the hell? According to your map we should be heading for the high ground, but it's barely rained at all.

Daisy sat in the doorway all night, watching the rain come down. If I had opened the storm door for her, she'd have gone out and laid in her wading pool to enjoy it, I'm sure. I think the lightning finally let up about 3ish, but the drive to work was certainly fun on 635.

I'm just thrilled Sadie isn't terrified of storms. 70 pounds of shivering Siberian husky in my bed would not have made me happy.

So THAT's what I saw 30 miles east of here yesterday. Couldn't figure out why the storms were coming in from the southeast. You're like my one-stop blog ... I can even get pertinent weather reports from Phlegmmy.

Tipper was barking in his deep "WOOF" warning tones at the thunder. He thought a giant monster was outside threatening his Mama.

I kind of miss having a real storm -- it just rains here but rarely thunders. It always seemed like Texas storms clear the air the day afterward.

christina - that's because you live in the land of freakish extremes, oui?

myron - saw a tornado once in Arkansas. It was a trifle unsettling.

james - I think I posted that radar thing several hours before you posted your comment, so it prolly had came & went by then...

rabbit - my doglet is getting so old that for some reason, she doesn't bother with the panic fits when violent storms come 'round these days.

holly - And of course, being a badass Agitator, Tipper was ready knock its block off

becky - all my friends who moved to Seattle have said the same thing - that they miss the really electric storms we get here.