A couple days ago I got an email from a friend, saying she thought I should get out of the house. She invited me to a gathering of off-road entoosiasts, primarily Hummer-owners. I dithered and probably would have begged off, but finally, the allure of compelling something large and expensive over boulders and other unlikely surfaces won out, and I called her late Friday and agreed to come along.

A caravan of mostly Hummers headed out to east Texas Saturday morning, and the conversation was great as we drove along, laughing and howling as we went, quotes from Office Space, Idiocracy and Bubba Ho-tep being bandied about like oxygen. We turned off I-20 at Gilmer and had the misfortune of falling in directly behind a funeral procession crawling at its ubiquitous pace, and we moseyed along as opposing traffic remained pulled over on the side of the road for our passing, even though the funeral escort had already passed them. Still, it must have been an interesting and odd sight out in the country like that, seeing all those Hummers in a row.

We got to the mountain in time to run one course before the catered barbecue was ready for lunch. My friend and her fiance discussed my prospects and said that I should run something like a beginner course. I said, "yes, tadpole class, if you please." I really didn't feel anxious about it, but at the same time, I didn't want to break someone else's high-dollar toy.

Right after lunch began the running of more challenging trails, and as my friend wrestled the bucking Humbeast into submission up an alarmingly-close-to-vertical trail, I questioned the choice of barbecue. That said, I have a cast-iron stomach, but one is not generally agitated like a cocktail shaker after a meal, as rule, so perhaps that was a factor. To my relief, other than that one moment of gastrointestinal upheaval, I had no more cause for concern. *whew*

Fiance and another man worked as spotters, standing/walking near the vehicles and giving instructions at the really rough/tight spots. They were the key to no one getting stuck or rolling over, I believe.

To my surprise, in the middle of a very challenging course, fiance made me switch with my friend and I took the H3 down a rutted-out, boulder-strewn gully in the vehicle by myself. It was kind of evil of him, but in a weird way, it was very smart. I wasn't expecting to drive just then, so I really had no chance for nerves to kick in. At that point, the only option seemed to just climb in and let 'er rip. It was not as frightening as I expected, and it felt - dare I say it? - natural to be piloting that big machine.

So, I'm hooked: it may not be soon, and I may not be able to afford a new Hummer, but sometime in the nearish future - like in the next few years - I really want to get an off-roadish something-or-other. I really did like it that much. Good stuff.

The image below is not of me, but it is someone driving down that same runout that was my first run off-roading. It's much steeper than it looks in the photo, by the way. 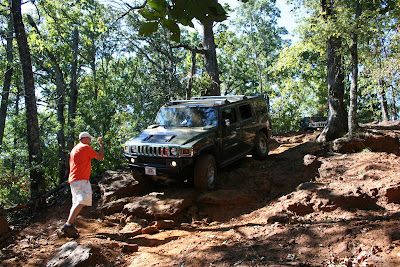 Happy Birthday Baby Sister. I love you! Enjoy that new Cooper Mini.
Posted by phlegmfatale at 2:15 AM

Good to hear that you had a grand day out trying something new.

Hummers are way too large for our small roads over here - have seen one or two and they just look out of place. The "experts" usually say that you cannot beat an old Land Rover for off roading - not very luxurious though.

Looks like you had great time. Did anybody get high centered? Or otherwise immobilized? Or get anything bent? Now that's when you know you're 4 wheeling LOL

I loved my lil ol' Toyota 4 wheel drive pickemup. I used to go out in the desert or up in the mountinks in So Cal.

Oh yeah - Happy birthday A. Hope you have as much fun as your big sis. And like she said, enjoy the Mini.

I DID I DID I DID!!! I'm glad you had fun, I can totally see you lovin that. I am way too high strung for those kind of adventures. But I must say, I'm not drivin like a grandma anymore. Everything is sweeter, brighter, better when driving a Mini, go test one today(get the S). Thank you for the birthday wishes! By the way, I think I like people again. A

Looks plenty steep to me...

Glad you had fun, and that you got to drive, too.

Me...nuh-uh! I think being a passenger on an excursion like that would be quite enough adventure, thankyouverymuch!

Happy birthday to you, A.! Glad you love your new wheels. And glad you find parts of humanity likeable again.

So these vehicles join the nearly dozens of SUV's that have ever been offroad!

You know, you really don't get the full effect of that until you enlarge the picture and look at the wheels. Awesome. Looks like you had a blast!

Did you take any video?

You failed to mention how many broke suspension or drivetrain components during this excursion.

Of course, I'm spoiled, having driven an ancientish Land Cruiser with a 454 Chevy transplant, military 5 ton axles and transfer case.

dba dude - Yeah, it would be obnoxious to drive a Hummer in England, I think. I've seen way too many roads there that were only one lane wide with the occasional little pull-out where one car waits as another passes by, and something that bulky would be rude. Land Rover has a great legacy in the exploration of a lot of uncharted territory around the earth, and that's pretty tall braggin' rights!

myron - actually, the spotters were superb, and although a few folks ignored instructions at their own peril, they eventually came around and were able to back up and make it through every obstacle with guidance. Nothing major was broken, but someone didn't take their step-side thingies off and squished them on the first obstacle. We DID get in some tight spots, though. I was thinking if you were driving around the wilderness alone in one of these things, you'd better bring a chainsaw. Thanks for the birthday wishes from Sis.

SIs - it must be my major driving mojo that made you say so, and I love hearing you say I seem like someone who'd thrill to offroading. I think that's a huge compliment to a woman who wears a dress nearly every day. Even with the Mini, you'll pardon me if I don't hold my breath on how long you'll be so generously disposed toward humanity. Then again, I will say that even 27 down the months from getting my little SUV LouLou the Baby Shoe™, I feel kinda sparkly and *ting*y whenever I drive her. Everyone should get their dream car (within reason) at least once in their life time. I have to say I want a Hummer now more than the car that made me drool a few days ago, something called a Lotus, whatever that was. I'm guessing I couldn't afford that in a year of Sundays. Ah, well.

christina - I'd welcome you as a passenger along with me, so long as you are not a squeamish type - I'll expect you to suffer in silence! I know Sis appreciates the birthday greetings. :)

g bro - at LEAST! There was one guy early in the day some were speculating wouldn't have the stomach for it. Sure enough, he looked set to have kittens after some minor scratching, and he hit the road... not his cup of tea, making his big tough vehicle look like it had any actual experience at anything. He'd obviously never heard that chicks dig scars.

kelly - thanks, babe! Nice to see you back in blogspace! You should have seen it! It so totally rocked. I took some video which I downloaded'd onto my work computer last night, but for some reason, I have to install something from my camera CD to make it translate into YouTube. I'll fool around with it again either tonight or tomorrow and get it posted on youtube and then here. The chick I was riding with was fan-bloody-tastic, really comfortable with what she was doing, and I never was afraid once, although there is the most incredible adrenaline energy you get from it. In truth, she did way more tough courses than I, but I saw from her example that you just get in there and do it, you rely on your spotters, trust your equipment to function, give it the juice to do so, and it will.

Rabbit - *L* None crapped out or were structurally compromised, actually. We saw some other people get stuck and have to be towed from paths we deicided not to take, but they were all driving old pick-up trucks. Holy crap, Rabbit - that Land Cruiser sounds like a monster. Fun, eh? I really wish you had a blog.

Ya know, that looks like it'd be fun. I might even give it a try one of these days.

Well, there you go, Roverians - you heard the man. Anyone? Anyone? Bueller? *crickets*

Phlegm, suffering in silence is my specialty...Silver has a learner's permit, ya know!

I got a Toyota 4X4 for about $2K a while back and had a hell of a time beating around the local hills for a couple of years in it. There are cheaper options than a hummer for bundu beating...

I just don't see the fun in that, but I spend way too much time behind the wheel for my liking anyway.

I'm glad you enjoyed your outing though.

That's it! You NEED to move out here. Going for groceries can get like that. Definitely less stressful driving that stuff than being a passenger, too.

That looks like a superhighway for my KTM, or the first turn of a great cross-country race! I just prefer two-wheels. :-)

christina - I've finished with the suffering-in-silence phase of my program. Now I'm on to raucous desperation

kevin - actually, you've read my mind, because my off-roader will HAVE to be a total beater, because I'm going to ding the ever-loving crap out of it. I shall christen it "Therapy" and I will love it and pet it and stroke its fur.

barbara - thanks babe! :P How soothing, though, would it be to imagine monster-trucking right off the road, into the wilds and far from the madding traffic jams? Mighty much, I'd say.

lin- Totally - this is true - when a passenger in that scenario, one would prefer to be walking (clambering?), somehow.

dirtcrashr - dirtbike guys are hot. I'm just saying. Nothing wrong with that.