I went to see Becoming Jane on Tuesday night at .50 night at the 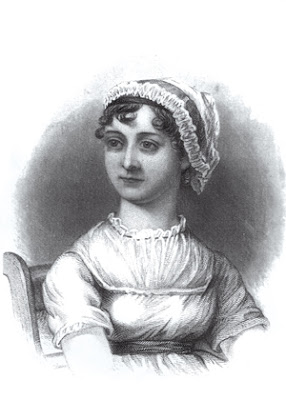 dollar theater. It was worth the half-dollar to see all the supporting cast, but I kept thinking how much better it would have been to see an actual English actress playing Jane Austen, rather than Anne Hathaway and her spotty accent.

Anyway, Jane Austen was no great beauty, and while Miss Hathaway can be almost frightening with her peculiarly large eyes, I think she's not nearly plain enough to evoke a true sense of the sad author.

The supporting cast included Maggie Smith, the marvelous Julie Walters, James Cromwell, and the haunting blue eyes of James McAvoy. The costumes were nice, the sets and scenery were lovely. Actually, th 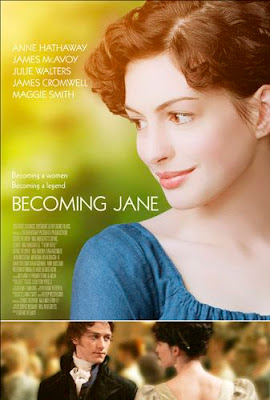 e lighting seemed more naturalistic than one generally sees on film, and although it was distracting in a way, I really liked that.

I really wanted to like the film, but it seemed rather disjointed. Some scenes the dialogue was completely rushed and trying very hard to seem clever, while other scenes seemed more well-paced and built suspension nicely.

OK - I have to say one good thing for this film - it doesn't have the big Hollywood, pat happy-ending event (not referring to a massage feature here). Some characters sublimate their own wishes and possible ultimate personal happiness for the well-being of others, which is a rare theme in the cinema of today. For that degree of restraint, I do find the film at least commendable. If you're someone who can't get enough of the regency-style costume dramas, you'll probably love it, and I wouldn't criticize you for it. It's just that we've seen a lot of that in recent years, and two productions in particular were so impeccably done that they will likely excel all future efforts at realizing Austen's novels. Of course, I refer to Emma Thompson/Ang Lee's Sense & Sensibility and the BBC miniseries production of Pride & Prejudice starring Jennifer Ehle which are exceptional productions. (The Keira Knightly film of P&P is breathtaking to look at, but she's so marble-mouthed that Austen's brilliant, pithy text seems D.O.A on her lips).
_______________
Sometimes, something you expected to be rather ho-hum and too-clever-for-the-room will surprise and delight you.
Such was the case with a film I put on DVR last week, Everything Is Illuminated, starring Elijah Wood and this fabulous Russian guy, Evgeny (eugene) Hutz, who is the lead singer of Gogol Bordello. [GB is coming to Dallas in two weeks and I tell you, I can feel myself slipping into full-on chihuahua mode, I am so excited!] Anyway, this movie is at turns tragic and hilarious. It's melancholy and bittersweet, but I think it's ultimately incredibly uplifting in a very subtle way. I can't recommend it enough.

A young American man travels to Russia to find a woman who helped his Jewish grandfather escape the Nazis during WWII. He hooks up with a cheesy hip-hop Russian playa' and his grandfather who act as his tour guides as he searches the countryside. The search ends up being transformative for all three men in unexpected ways. This is one of my favorite movies since the turn of the century, and definitely in my top 50 of all time.

All I know about Anne Hathaway is (i) she's cute and (ii) she's the daughter of a high school classmate of the Mrs.
I do relish the fact that you can use Jane and Hathaway in the same sentence when talking about this movie.

I haven't seen either movie.

One can "miss the mark" in addition to Jane and Hathaway in a sentence referring to this film. Nice! She is cute, but she's turned into one of those actresses whose tropes are so easy to spot - you can SEE her acting. Julia Roberts is the same for me.

Thanks for the reviews! I thought Everything is Illuminated was really sweet in a bizarre way. LOL

If its origin is English then let the English interpret. I abhor Shakespeare performed by Americans for example.

LOVED everything is illuminated!

Second one sounds cool. I'll have to check it out.

i've been SO wanting to see 'Everything is Illuminated" - mostly cause i LOVE the elijah wood - too ador-A-ble fer words. now I must go if fellow star wrangler's have seen it!

A while back I posted that Everything is Illuminated was one of my favourite books. I had no idea there was a film. Wonderful.

Hmm...Hathaway, eh? Is it just me, or does she always seem to get a makeover and wear elaborate dresses in every movie she is in?