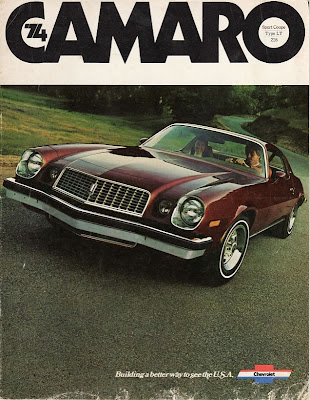 My first car was a gloriously bitchin' '74 Camaro (how did you guess?)my parents gave me in 1983. Yeah, I knew my car would go 150, but I was chintzy with that 63 cent-a-gallon gasoline. I worked as a checker for Winn-Dixie (I totally rocked that job) and I made $6.36/hour, more than double minimum wage, so yeah, I was chintzy with the gas.

But there was the one time three boys from the football team who were neighbors wanted a ride home. I think they peed theysefs when I said "Lookie what I can do!" Yes, splurge when you have company, darlings. I poured on the coal and burned about 1/4 tank of gas in about 45 seconds. If you think about it, it was a role-reversal of a certain intimate act. *wink* Seriously. It was good for me.

I think I leered at them, my face cracking into an evil rictus of a grin when I said something like "If I sneeze in about 20 seconds, we'll probably all die" and then I opened 'er up. Doug Johnson's eyes got big as saucers. I think it's good to unfurl a pithy line at the appropriate moment to mark the occasion. They didn't laugh.

OK, that was kind of bitchy/jerky of me, wasn't it? But they were guys. I thought they were sposta be tough, or something.

Oh, it was glorious, my darlings. Actually, that's the only time I ever really drove very fast. I was so cheap! What ever happened to her?

Anyhoo, in honor of my first sweet ride, here's Bitchin' Camaro by the Dead Milkmen.

Posted by phlegmfatale at 11:09 PM

I had a 79 firebird at about the same time, and got it up to over 100 once on the way home from UTA. It only had a 305, but it could rock if I gave it enough time. I think my Solara has more punch now. It was fun though. Love the ad.

Loved it, and Silver remarks that it's so random, and freakin' bizarre!

The Dead Milkmen, of course, not the rest of your post!

christina - Glad you liked it. Yeah, the Dead Milkmen were a hoot - so not corporate or like anything else - very hand-crafted. This was from their 1987 cd Bucky Fellini. Wow, where did 20 years go? Sheesh!

You have always had the attitude, haven't you? Good for you! Glad you impressed the poop out of those boys.

How odd that you would play the Dead Milkmen - we listed to them quite a bit on the road trip.

Reminds me of my "Smokie and the Bandit" Trans Am!