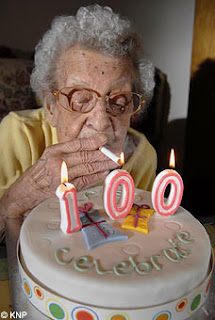 Society's little hall monitors want us to know that people only started dying because of big tobacco companies and fast food outlets and SUVs. Before those things came along, no one ever died for any reason.

What a difference a day makes, eh?

On August 27th in the UK's The Daily Mail, they featured a story on this delightful creature celebrating her 100th birthday by lighting her cigarette with one of her birthday candles. I think she's adorable, and she looks like she has an exuberant sense of fun. Who am I to tell a bitch she can't light up, and vice versa? I don't smoke, but I think we have plenty of proof around us that smoking doesn't absolutely kill or damage everyone (or even most) who practice that habit. I say let the old girl smoke, whether or not she inhales.

Contrast that with another Daily Mail article on the 28th which says that smoking causes people to die younger, and therefore as a more staunch warning, photos of corpses and smoking-related tumors will be printed on the cigarette packs in the UK from now on. What absolute twaddle!

Remember those grisly driver's ed films they made us watch in the 80s? Horrifically bloody car wrecks circa the 1950s with corpses strewn about? And even after all that, how many kids from those same schools still went on to die in idiotic car accidents? Most of all, how many people were grossed-out for life, unnecessarily?

Hello, class action suits and candidates making political hay out of demonizing smoking? All this crap does is de-sensitize people to the whole issue. It's insulting, and it's just as disgusting as those morons who stand on the street holding giant photos of aborted fetuses in full view of every child who rides by in a high enough car seat. Nasty people who take out their impotent rage on the wrong people every time.

And while we're talking about it, now Hillary is saying smoking should be banned in New York. Well, when she threw that ashtray at Bill's head, whose ashtray was that, pray tell? Hers or Bill's? Or maybe that ashtray wasn't used for ciggies.


Everything Gives You Cancer by Joe Jackson

No caffeine
No protein
No booze or
Nicotine
There's no cure; there's no answer
Everything gives you cancer.

Posted by phlegmfatale at 2:14 AM

Everything does give you cancer. The sun, no sun, too many apples, radioactive nuclear waste...

Yep, I remember those drivers ed films. Now kids click on LiveLeak to see evil shit every day. Makes you wonder what lengths they'll have to go to to get kicks in the future.

And happy birthday to the little Winnie. May she puff away to her hearts content. Love it.

I read your post with interest because it is well done. I also liked the photograph and thought it appropriate. then I read about the do-nots and found them amusing too.

The one I didn't find or two were those the US Army fed us before our first leave in Japan. We were given a dose of sex-related diseases with graphic depictions of what things look like in the worst case.

Then everyone broke ranks and trotted out the door and into the arms of waiting prostitutes.

The other is the look at the frost bitten feet and toes of soldiers in Korea. They showed the doctors popping off toes at the joints. These were black, juicy, frost bitten toes that popped off something like a sucker pops out of a kids mouth.

Thanks for stopping at my blog and for leaving a comment there. I do appreciate it a lot.

Even more interesting that he wrote that song a good 20 years ago!

Denis Leary's "No Cure for Cancer" STILL makes me laugh so hard tears are rollin' down my thighs. If you've never heard it, you might want to see if you can find it on You Tube , it will definitely make you laugh. But then...anything Denis does as stand up makes me laugh. Especially "Get the Fuck Over It"!

We would like to do an interview with you about your blog for
www.BlogInterviewer.com . We'd like to give you the opportunity to
give us some insight on the "person behind the blog."

It would just take a few minutes of your time. The interview form can
be submitted online at http://bloginterviewer.com/submit-an-interview

BTW...I am definitely NOT working on Saturday (wooohoooo!!!!). I'll call you, let's get you oot and aboot.

(sorry, I got all Canadian there for a minute)

Isn't it in England where there's a clothing line with warnings about obesity on the labels of larger sizes? Or did some idiot just suggest that?

As long as nobody smokes in my car or home, I don't give a crap whether they smoke or not.
I work in a casino, for God's sake!
Talk about smoke.
No smoking in the spa, though! :)

And I love how my daughter's school district keeps trying to ban unhealthy foods from the cafeteria and vending machines, but right across the street from her high school campus there's Jack-in-the-Box, KFC, Pizza Hut, and Taco Bell! I'm sure the location of the school had nothing to do with the decision to place the restaurants where they are...

At one time, I posted this mp3 on a blog entry describing my dad's trip through cancer world. It's a great tune, isn't it? It's the first Joe Jackson tune I fell in love with.

Glad to see you're back in full swing since the pneumonia.

I am so thrilled to hear you rant and roll again - a wonderful sign that you are springing back from that rotten pneumonia. YEEHAW!!!!

sis - I expected some smarty pants to make that observation.

fhb - yup. gruesome stuff out there.

oldmanlincoln - indeed, the cautionary tale(tail?) is worth only so much. The toe-popping thing made me cringe! Thanks for stopping by!

liz - and it's even truer today, oui?

hols - I'll look that up

kelly - I THOUGHT that was Canadian! It's gonna be fun!

christina - yeah, i forgot about that big labels thing in England - true. I heard that, too

sudiegirl - thanks hon -it's good to be back. Yeah, that's one of my favorite JJ songs - so clever and ironic