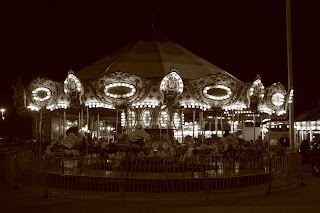 This weekend was the first time I've picked up me camera in yonks. There was a traveling carnival at Valley View mall so I stopped and snapped a hundred or so images. It felt good to be looking for shots again, and I got a few I really like.

I've never been a carousel fan, particularly, but I loved the faded splendour of this one. The horsies (and rabbits and zebra & others) were in very good, new condition, but the embellishment on the ride and the ornate glass covers over the lightbulbs had been rather neglected. The paint 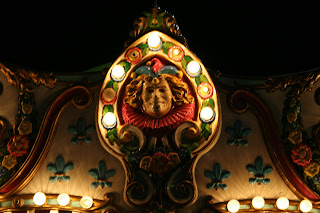 wasn't chippy, but the missing/broken lights were sort of haunting. It was sort of like some old dancehall queen with too much makeup on, fading feathers and holey fishnets. Loved it.

Went to see Mr. Bean's Holiday. I rather expected a series of low chuckles interrupted only by the occasional laugh, but I pretty much howled through the whole film. So did everyone else, so it was't just me. Now mind you, I already love Bean and I like cornball humor, so you may want to take that into consideration. To me, this was SO much better than the last Bean film, and much more like the series than the previous film was.

Willem Dafoe manages to be incredibly funny in the process of poking fun at the art film industry. You may have seen the langoustine-munching scene from the trailer, but there's something even more pants-soilingly funny in that scene. You'll never look at oysters the same way again.

An un-credited star of the film is the breathtaking French countryside. There are spectacular shots of the Millau Viaduc, a nauseating-looking bridge between two plateaus in southern France which at 1,125 feet is the highest bridge in the world. It spans 1.5 miles and is supported only by 7 pillars. Seriously. I felt woozy just looking at it on film. There is no end of breathtaking countryside in this film, and despite frenetic scenes of which there are plenty, Bean's comic schtick is never rushed in the more pastoral moments. Looking around, I had one of those Tahiti revelations where I actually found myself sorta wanting to go there.
Sorta.

If you need a good laugh, this film is a definite tonic.
Posted by phlegmfatale at 2:03 AM

Okay, I've stepped down my worrying about you if you were able to get out and laugh your butt off at Mr. Bean's classic idiocy and get off on a faded glory carousel. Thanks for the update - I am greatly relieved now.

I dunno. That kind of humor allways makes me feel uncomfortable and kind of embarrassed. Like it's all happening to me, or something!
I'd have to look away most of the time, and end up missing the whole movie!

Cool shots. Good to have you back. I'll have to see that film. The clips are hilarious.

I was pleasantly surprised at Mr Bean as well. I may go see it again.

Looking forward to seeing this one. Whenever someone mentions Mr. Bean, I immediately recall him putting on his swimsuit on the beach while full attired.

Never could get into Bean. I tried, too.

I read Atlas about 15 year ago. Great book.

Hmmmm, I'm on the fence about Mr. Bean in general; but I might consider going! I'm up for a surprise!