OK. I just want a clarification.

If a sitting US President (Democrat) splays an intern on the presidential seal on the carpet of the oval office and inserts a cigar into her nethers, that's his private life and nobody's business; and if a governor (Democrat, married to a woman) is exposed as a sexual predator who molests other men, well, he's just exploring his sexual identity--after all, it's his private life and we should let him get on with it and his wife forgives him and it's no one else's business; but if a Senator (Republican) plays footsie with another man in a bathroom, well, THAT is a moral outrage and he should resign immediately.

All I am asking for is some consistency. I think it's idiotic for anyone to wrap themselves around the axle freaking out over Craig's gayness. So what? The orientation is immaterial to me. I just find it tremendously ironic that I'm hearing the same voices in the media who were outraged over Clinton's (hee, I spelt that "Clingon" first) indiscretions are also loudly decrying this Craig tool. Yet, the same people who so vociferously defended Clinton are now crying for Craig's blood. Anyone for hypocrisy? Apparently it's all the rage.

Here's what I have personally concluded and I'm guessing this will eliminate me from consideration for the jury pool:

1) Craig is a dirtbag (just like a lot of our morally bankrupt elected leaders - I mean, how many "real" people would give up a decent quiet life for all that D.C. hogwash? I mean, you can't get away with wearing wild shoes there, so what's the point?)
2)Craig is unworthy of the people who elected him
3)Craig might resign if anyone still had a sense of honor or decency, but I really don't think many people in D.C. know what that means any more. They've crossed over into Machiavelli-land and will only relinquish power when we pry it from their clutching, lifeless fingers. And their little lap-dog media, too! 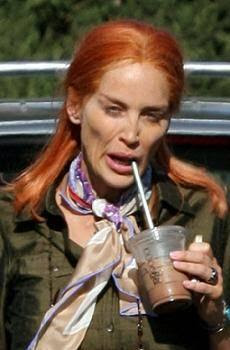 Posted by phlegmfatale at 2:46 AM

Sheesh. The old lady in the picture below looks better...

Dear gawd, what happened to her?

But what are we gonna do-- arrest her for smoking?

She looks a little like my mother in law but not as pretty. Yoiks!

I was gonna guess Darryl Hannah. I bet the scarf covers up something scary. A

Yeah, but did you notice how nice her nails are?


...myself, I never cared much for skinny chicks, no matter how in heroin chic may be.

OMG! Remember Total Recall?!
She was HOT. Now she looks ready to play the role of the junkie prostitute Mom who pimps her children out to make money for her next fix!

She needs a bag over her face. Yikes! How awful! Scared me so early in the morning!

And, the sweet little old lady does look better! She can smoke all she wants. Doesn't seem to bother her health at all.

1. As Freud didn't say, some times a cigar is NOT just a cigar.
2. That Democrat governor resigned, n'est-ce pas?
3. Craig's resignation is being called for by Republican leadership, not your whipping boy MSM.
4. I think any sexual encounter with a stranger in a public toilet is very creepy, regardless of party.
5. I read the indictment. Nothing really happened except some toe-tapping and finger waving under the stall wall. Basically he pleaded guilty to intent.

Uh - EEEWWWWWW icky picture of Sharon Stone. It looks like her straw got hung up on her dentures.

She looks like she's coming soon to a trailer park near you. What's going on with that? My dye job looks better than hers...

Great googly moogly, I though it was Julie Newmar (MWOWR)!

So are the D's trying to say that it should be a crime to troll for homonookie in public?

What a curious position for them to take!

Wow. That IS depressing. I used to think she was hot.

barbara - harshed. It's the only word I can think of. And my goodness, she's only 49.

Sis - I thought Darryl Hannah at first, too. eep!

;ainy - heaven help the beautiful and famous when their grip on image control starts slipping. It's a cruel world.

g bro - 1. *nodding*
2. oui.
3. Actually, I've heard non-conservatives bitching about it, and honestly, I've tried to get away from the MSM in recent times
4. d'accord.
5. Foolish man. He's a "Lawmaker" and didn't know what he was doing when he pled guilty? Poppycock.

liz - you know, I think she needs to eat about 40 bags of pork rinds, personally. She is too skinny and obviously has lost a lot of collagen in recent years. I think she looks too old for her age. Maybe she smokes heavily? Oh well, she's had a nice ride for a while, anyway.

kevin - You know, hon, you probably will think she is hot AGAIN. On film and in photographs, those people are painted and cgi'd to within an inch of their lives, and given the proper setting and good lighting, and for her not to be doing something unflattering like sucking on a straw, then she probably won't look so rolled-up-like-a-venetian-blind. This was a confluence of a lot of unfortunate things for Shaz - way harsh lighting, bad hair color, bad angle, the worst possible moment to be snapped with the face all accordioned-up in mid-ingestion. A bad combination.

Don't cross your knickerless legs in front of cops!
This time you'll get arrested.

Sooner or later, life slaps the crap out of us all!

I had to highlight. God.

Yep, there's hypocracy all around. fer sure. I thought Darryl too. Damn. Hope that hair and look are for a film, but I don't think I want to see it.

And the thing that gets me is Craig's hypocrisy.

"Put a democrat and a republican in a barrel and roll them down a hill - and I guarantee there will be a lying, thieving son-of-a-bitch on top every inch of the way!" - Bill Green's Grandpa

It's probably of sign of where I get my news, but I went to the CNN, BBC, Reuters and Fox News websites. Nobody reported a non-Republican saying anything about him, but came up with a long list of Republicans.

blarg...that's the stuff nightmares are made of.

As for Craig, I'm still not convinced he did it.

fhb - I suspect that she looks worse than usual here, but still, sheesh!

g bro - I haven't been to those websites, and I'm sure you're right about them

hammer - indeed.
You know, he may not have, except what sticks in my craw is the "pleading guilty to a lesser charge" bit. I mean, if you're not guilty, you go down fighting against what's wrong. If he's completely innocent and this was a big elaborate set-up, then apparently he's so accustomed to allowing his constituents to be screwed that he finally let it happen to himself. Oh, and I'd say he has a shitty attorney, as well. If he's his own attorney, then he has a fool for a client.

I did guess it correctly before I checked! Yeah, I pretty much agree with everything you said about Craig.