Don't be surprised when Sean Penn runs for president someday. He went to New Orleans right after the hurricane and he's been to Iraq and now he's had a romantic rendezvous with Chavez in Venezuela. Jeff Spicoli, like, wants to be taken seri 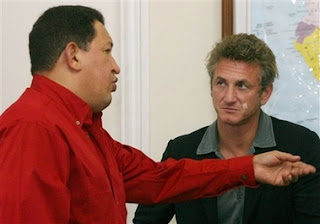 ously. Anyway, he's building up his little CV and going on the record in support of totalitarians far and wide. And in case you didn't get it the first 50,000 times, he really, rilly hates George Bush.

Chavez said: "In the name of the peoples of the world, President Bush, withdraw the troops from Iraq. Enough already with so much genocide," to much applause from Penn. Apparently Chavez is ok with genocide so long as it's being done by Saddam or someone of a more domestic ilk.

I love this picture of Sean looking all intense with the little plaster on his cheek. I'm just going to imagine that's a piece of toilet paper where he nicked himself shaving. Classy!
Posted by phlegmfatale at 4:52 AM

I didn't know Sean Penn was an American.

He was born in Santa Monica, dude!

Do potato heads have nationalities?

Yeah, where he wiped his mouth after sucking up!

leazwell - well, they probably only claim their nationality when it's convenient.

Is Santa Monica really America, though?
I cannot look at this guy without remembering his pathetic attempt at heroics during the whole Katrina thing, sitting in a sinking boat because he didn't put the plug in...
I've so had it with people like this clown and Sheehan pandering to dictators. Frikken cockroaches, the lot of em.

What a complete dufus. Ya gotta wonder, what the hell is a person like this thinking... "I'm gonna use my celebrity to do something REALLY important, like showing the world what an idiot I am", and that actors really DON'T need to be smart to be good at acting. You know, he's like that guy who used to be seen dancing with Imelda Marcos all the time, George something-or-other, only there's all the liberal earnestness about it all.

Sean figures if he can't be President of the United States then maybe he can take over some banana republic and be a drug lord dictactor with a rape room and all that. He's probably checking Chavez up and down to see if he can spot any obvious health problems in hopes that he'll kick the bucket soon and Sean can move in, like Fidel's brother.