What do we value?

This article on Iraq war veteran Anthony Maschek who was booed at a forum at Columbia University was dazzling. Maschek was booed for saying he thinks ROTC should be allowed on the campus at Columbia 42 years after it was banned from that campus, and clearly the majority of students gathered there vehemently disagreed with him on that score.

That Maschek was booed by a bunch of Ivy League brats was unconscionable, but I found the following poster laughable to a staggering degree: 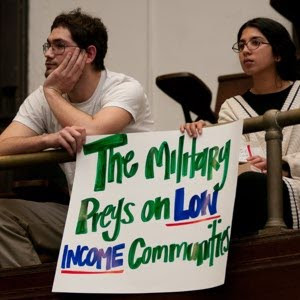 This sign says The military preys on low income communities.

What amazes me about that is the fact that for several years, I've been hearing more and more rumbling about useless degrees and certifications young American students are financing through universities and trade schools. Where is the outrage about young, naive people being exploited by the abject greed of a university system which-- like our Social Security system-- relies on steady growth of the influx of new students to prop up its unwieldy burden of tenured academecians and infrastructure?

Where is the outrage about universities enrolling still more students for degree programs for which graduates will find no market upon completion? The wisdom and morality of such a practice is truly so complex that it escapes me utterly. Hopefully someone will enlighten me.

Further, our military is voluntary, not conscripted. Countless men and women in the USA have been able to pull themselves together by virtue of the structure the military afforded them. That's not just poor folks-- Americans from all social strata have found purpose and direction for their own lives because of the discipline of life as an enlistee.

I'm not saying I think universities are all bad or that the military is preferable or vice-versa, but I do think it's the height of arrogance and vapidity that politically correct university students would presume to speak for everyone. The funny thing is that they'd probably be the first to describe themselves as "open-minded" and "accepting of others' viewpoints."

As often occurs, the real gems of the article are to be mined in the comments. I especially appreciated that of Rob:

I love the sign. The military preys on low income communities. First of all, no one is EVER forced to join the military. If a person signs and did it without making an informed decision, whose fault is that?

Secondly, all I can say is "Thank God"! If it weren't for the military, I would have been stuck in a horrible neighborhood in urban Detroit, and I would have never had the opportunities that allowed me to go to college, get a degree and teach.

So, thank you, military, for targeting me (so to speak) and helping me create a better life for me and my kids.

No one is ever forced to join the military?

I seem to remember back in high school having long discussions about which branch to join so we wouldn't get drafted to Vietnam.

I believe 18 year old males are still being "forced" to register for the draft, or risk losing such benefits as federally insured student loans. There's even a site you can go to to do this online - only costs you $25:

The penalty for refusing is a fine up to $250K, but no jail time.

Tax evasion is also a crime. There is no force to join, but there is the occasional Democrat Senator who threateningly raises the issue saying, "Re-institute the Draft!" as a means to bludgeon the other party and Scare Teh Youth - something nobody in the Military wants any more than they wanted the political posturing of DADT.

chuck: Register, yes. Join, no. Since chances of the draft actually coming back are basically zero, I'm not willing to count that as being "forced to enlist".

Nobody who joined to pick their branch in the Vietnam War is still in the military or up for active duty, unless they maybe decided they loved it and are just about to retire...

Back on topic, I recall reading that if you actually look at the data by enrollment zip code, it looks like the military, and especially the combat arms, go above the national average.

(Heritage looked at the DoD data for 2003-2005 and found unsurprisingly that most recruitment was from middle-class areas, and that in war years, poor areas are underrepresented.

Mere facts, of course, can't dethrone a narrative that's been Accepted Truth since before the people parroting it now were born.)

So, yes, it's absolutely correct to say that nobody in the military now was forced to join.

Ah. Their minds are so open it seems their brains have fallen out.

I found this disgusting also. The irony of course is that our soldier's fight for their right to be complete asshats. I have two kids in college and I do have to say that they are indoctrinated in this attitude, and were even in high school.
Parents have to stand very very strong and educate their children themselves, not least in manners and respect.

I've found these pillars of wisdom make crummy employees and are best left as fodder for the fast food industry. There, the general public can turn them into mindless drones praying for the chance to have their ass shot off in a foreign land.

My oldest starts college in the fall on an ROTC scholarship. He wants to serve his country. He will get his education and in turn spend his life with the armed forces. He is a career military man.
According to Obama we are the Super Rich! Ha! I wish!
My children believe in protecting freedom -- even for those who are complete idiots who run their mouths while disengaging of their brains.

Hi, Chuck K! Yep, you're correct about registering for the "draft". However, our military hasn't seen the need to "draft" anyone since Viet Nam. Today's military is strictly volunteer and I believe we, as a nation, should celebrate the fact that our young men and women feel the call to service.

From where I sit, I'd support a "draft" that would require ALL 18year-old citizens to serve a minimum of two years in service to our country. The 'service' would not necessarily be in uniform but it would entail service that would enrich our country along the lines of the CCC, TVA, and the other alphabet services that came to be during the Great Depression.

I'm a believer in giving back for gifts given. Our 'children' should give back to our country for the gift of having been born in the Land of the Free and Home of the Brave. No, I haven't considered the cost of reviving the old programs but I'd bet my future lotto winnings that it'd be more cost effective to institute that kind of program as opposed to the crazy spending we're enduring these days. What'chu think?