I didn't think so.

Since we're on a celebrity kick lately, how about the Octomom? Imagine the horror for her children when they turn out to have her original nose, lips, all her features? 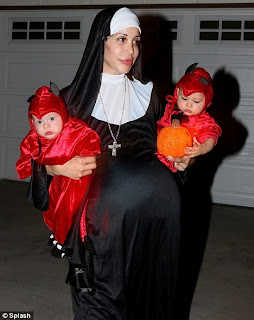 I work in a place that is 95% female which some have called an estrogen ocean. They're not kidding. In the break room is a book shelf crowded with every incarnation of women's magazine known to the American marketplace. Us, People, Woman's Day, you get the picture. They're all plastered with what I guess are tv actors etc, and there was one with a photo of the octomom and some of her latest litter on the cover, promising an article within wherein the human clown-car expressed some sort of regret.

I hate to be unkind to people, and especially to babies, but seriously - if you're going to churn them out like rapid gunfire, shouldn't you make sure you throw prettier calves than these?

There's something really creepy about the women that have litters. It's like some horror movie, with a brood of creatures being birthed by a demented woman that worships some dark diety. When you see them interviewed, you realize the creepy feeling is founded on something more than just irrational thoughts.

Your picture may be a confirmation.

Maybe you should seed the breakroom with some WIMMEN AND GUNS?

That is a truly scary photo...but not in the Halloween way intended (at least I hope it was Halloween.)

"human clown car", I like that. OTOH, I said to someone that she's not a women, she's a baby vending machine.