Yesterday I was in Waxahachie visiting my boss and her lovely parents. Waxahachie is about 20 or so miles south of Dallas, but it feels liked you've gotten more away from the city than that, in some ways. They live south of town. My boss rides dressage and has a couple horses on her land and I got to take some horsey photos, including a good naso-centric shot. I got nipped by a wiener dog. They're little tyrants, aren't they?


One of the coolest things about Waxahachie is an odd art gallery called Webb Gallery. They sometimes have art openings and they have lots of primitive and naive art, like prison art, folk art, and the like. They have lots of old authentic carnival sideshow banners, silk banners and hangings from Elks lodges and places like that. They will be having a big art opening on a Sunday afternoon in late July, with live music and whatnot. I'll let y'all know when that is coming up. Their openings are always fun, and you'd be amazed what a mixed crowd they get.


When I went in yesterday, I was greeted at the front door by this unfortunate two-headed calf. (calves? I dunno) They had at some point acquired and sold a collection of taxidermied two-headed critters. Alas, I was too late to purchase the two-headed baby chicken, as it had a hand-written "sold" note taped on the wall beside it. The baby chick stood, wings out, with an almost surprised look on its face. That is to say, if chickens can look surprised, well, this chick/chicks looked suprised. 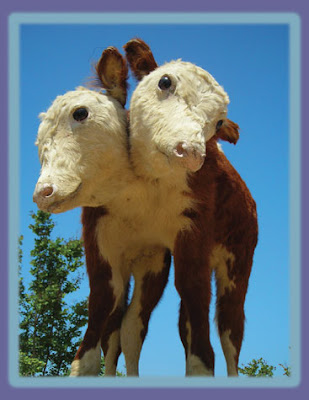 Posted by phlegmfatale at 1:42 PM

I followed the link and the two headed calf is the first image you see.

Sounds very interesting. I looked at some of the other stuff. Very cool.

They have a fun flea market there once a month. Lots of stuff on display. Check it out. That's a ways to go for you though.

I like the Ripley's Believe it or Not! museums...does that count as "art"?

Oh my ... I could just take a bedroll and live in a place like that. And that building! Sigh.

Those calves look sad, to me. It's a shame I missed the Fraternal Lodge Art show, I would have LOVED hat one.

tickersoid - it's a very interesting place - I think you'd like it

fhb - Waxahachie is an easy drive, actually, so it's not a big deal

kelly - You are EXACTLY their prime audience. You'll love this place WAY better than a typical museum. Pinkie swear.

lin - yeah - oh, and the building is FABULOUS. I could live there too. Love it.

hollyb - yeah, but they still have a shitload of the lodge art on display. You & DB will have to come for the art show in late July, if y'all are feeling up to it and you are in Texas at the time.