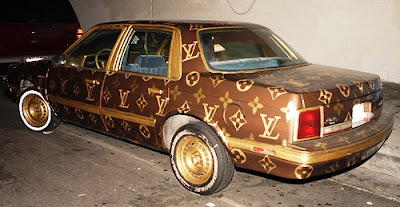 Remember that Louis Vuitton monogram car Madeleine Kahn drove in High Anxiety? She was also wearing an LV suit - it was meant to look ridiculous. Anyway, this car is a definite fake. One of the hallmarks of LV products is that on the real-deals, they have a proscribed layout of their monogram so that the initials are never cut off or embedded in a seam. Clearly, the initials are compromised by their proxmity to the wheel well. Totally fake. Also suspect this would not be a LV preferred canvas of a car. But that's just me.

For fellow label-whores out there, here's a VV article on sales of fake designer bags in NYC.

I'm pretty much ok with wearing fakes. The truth is I wouldn't wear or carry anything I didn't genuinely like, just because it has a certain label. My method is of the bait-and-switch variety. My theory on this has always been that if generally you are known to own authentic designer pieces, people will assume everything you own is authentic.

This article cracked me up, because the author had a Eureka! moment over something I've always known:

The next arrival is by far the more fascinating. She's in search of sunglasses—Dior, or maybe Chanel—and she's sporting a diamond monogram pendant that I am almost positive is by Harry Winston and costs in the vicinity of $12,000. (If it's fake, I've never seen anything like it.) Her very presence throws into chaos my entire belief system: I have always determined whether a bag is real or fake not by the quality of the bag itself (almost impossible), but by sizing up—and costing out—whatever else the person carrying it is wearing. But if Ms. Moneybags is mixing fake shades with Harry Winston, maybe everyone I see—on the subway, in the ladies' room at Bergdorf Goodman, in the audience at Xanadu—is carrying a fake. Everyone but me.

I didn't expect to have that in common with fabulous NYC bitches. Now, I don't have a $12,000 Harry Winston initial pendant, but I'd be proud to sport a fake. Nice work if you can get it, eh?
Posted by phlegmfatale at 8:49 AM

that has got to be one of the dumber things I've seen in a while.

It IS dazzling, innit?

The fellow who painted my motorcycles could have pulled it off nicely. Unfortunately, I later heard that he died from a high velocity lead enema in Texas under most curious circumstances. Skilled and highly talented but very sadly a loser at heart in the end.

lin - it's sad. I think a lot of very creative people are imbued with a self-destructive streak.