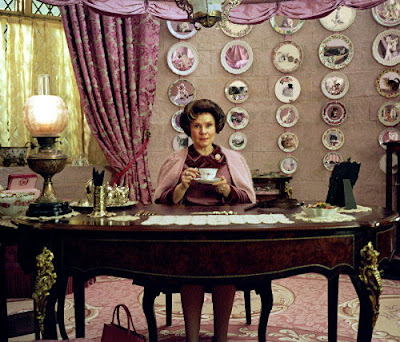 I had to do it - I had to go see the new Harry Potter movie today. After what seemed like 30 minutes of trailers, the house lights went down and a woman in the audience whooped and a couple people started clapping.

Imelda Staunton was superb as Dolores Umbridge. You'll love to hate her. Actually, I love her entire wardrobe, which is a symphony of garish pinks. I actually would like to own a few of those garments in more subdued tones. That probably tells you something very disturbing about me, but who gives a crap?

One of my favorite set designs of all the Harry Potter films is the scene in this photo, in Dolores' office. Each of the decorative plates has a different kitten or cat emblazoned thereon, and the cats meow and purr and make general cat sounds as they preen and move about the plate - it's a composite of disconcerting and delightful. Actually, that's a great analogy for Staunton's performance. She's kinda evil, but not super-evil.

I recommend this film, but as so often happens, there's too much rich detail that must be left out to keep it from being 4 hours long. The centaurs should have been on screen more, but I'll bet the CGI people were thrilled we'd never get a clear look at one of those creatures. I thought they did a great job showing the house hidden in the middle of the block in London, but pretty much aside from the cat plates, there wasn't enough time for the mindless niceties of setting and character quirks.

The story line was very cohesive, and I kept thinking of surprising parallels to life in 21st century America. The political leader, fearing loss of his position, acts to prevent students from learning protective spells so that the students will never use these powers against him or his supporters. A weak, uneducated populace is more easily controlled.

Hmmm, I'm too tired to chase that rabbit. Anyway. Good movie. Go see it.
Posted by phlegmfatale at 3:06 AM

Thanks for the info. I'll have to take my 16 yr. old daughter to see it when I get home. I did read all the books so far, so I'm not expecting as much from the movie.

Now I'm really curious about the hidden house in London. I love seeing how the reality (so to speak) matches the image in my head.

That's a long book; it must have been difficult to distill it all down.

lainy - it's good, but I'm wondering about the ability of such a film to satisfy either the avid fan of the books or those who've only seen the films

barbara - I think they've generally done a superb job realizing the visions from the book. Loved the bus a couple movies ago, for example.
Yeah, it MUST be a daunting task, and especially because the filmmakers didn't know how it all will ultimately end-- what to emphasize? Which bits were vital to show and able to be omitted?

Promised the kids this weekend. They'll hold me to it ;)

I don't get to do movies but I like Ms. Umbridge's office. It reminds me of my previous parlour although I preferred to call mine a melange of raspberry creme and black rose. I could have really gone for those living kitty plates, too.
It is just me or does her 'do' remind you of Ann Landers, too?

lin - Yeah, she was a kick, her office and her wardrobe. Yeah, I'd love those kitty plates, too. Yes, very Ann Landers. A little TOO perfect.

Probably will, some time.

fathairybastard - it's worth taking a look