August Belmont Jr., racing enthusiast, was an important early investor in New York City's subway, and he also founded Belmont Park, named for his father. This park would become the namesake of the third jewel of the Triple Crown. A lot of people don't realize Belmont played a major role in historic neighborhoods in Dallas.

In 1892, Belmont purchased an area of Old East Dallas now near the Whole Foods at Lower Greenville Avenue and (what 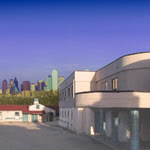 Charles Dilbeck was a student of Frank Lloyd Wright, and his work evolved from a derivative style into a mid-century moderne vintage uniquely his own. One distingushing characteristic of a lot of his designs is the higgledy-piggledy brickwork, which I find utterly 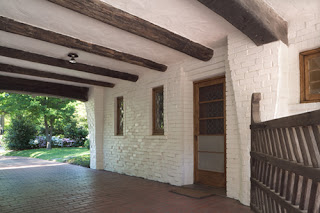 beautiful. Here is a page featuring several of his Dallas homes. Dilbeck is credited with having designed the first Texas Ranch House, which is a very distinct style here.
The brick house painted white here gives perhaps a better impression of the very non-uniformity of his brick-laying. I love this. Maybe it's nutty, but my love of asymetry thrills at the unlikely sight of mis-aligned brickwork that holds together decade after decade.
So, in the 1940s, the Belmont Hotel was constructed at the corner of Sylvan and Fort Worth Avenue. Designed by Charles Dilbeck, the Belmont was one of the first hotels to feature year-round air conditioning. This hotel was run down and even abandoned for many years. I always lamented its sorry state, because I thought the lines of the structure were magnificent.
Once in the mid 80s, a theatrical group staged a play on one of the hotel's balconies with the audience sitting in the parking lot in fold-up chairs. I decided that night that this was the best view of Dallas. I was thrilled when a development group undertook the restoration of this exquisite structure in 2005. It's a hotel, but also has a grand balcony next to the bar. Also, the art-deco diner next door is being restored, and will no doubt be a favorite haunt of all the coolest kids in town. It's absolute cream puff, and though it's expensive, I expect it's well worth the dosh.
Some time soon I'll spend the night there and I'll give you a full report.
Posted by phlegmfatale at 12:26 PM

I love his use of contrasting ceiling beams in his architecture.

That production in the parking lot is brilliant! Love it when people think beyond the obvious!

Cool buildings! I studied Wright's architecture in art classes years ago but have yet to visit one of the homes he designed. I can see Wright's influence in these buildings.

Thanks for writing this.