OK. I'm finally doing it. Monday night I took the plunge and listed something on Craig's List, which (judging by their rabid following) is as addictive as the Devil's dandruff* and even more easily accessible. You may never hear from me again. My soul will lose its way forever like that boy who disappeared in the Helen Reddy classic Angie Baby and my days will spool out in a Craigslist-induced haze, a feed-bag of oats around my head, diapered and permanently glazed over. Then again, I won't know, so I won't care then, will I?

I have a Celeste which has been haunting the garage for ever-so-long, and I've decided to cut it loose. Here's the text of my ad, which I thought was a tasty little nugget. Oh, and email me if you want to buy this Celeste.

Well, I knew it was a long shot.

You know the adorable bell-theme at the beginning of Mr. Rogers' Neighborhood? Well, I always fantasized I'd one day be playing that theme on this Celeste. Then I expected I'd go on to be the Viktor Borges of the lounge chime-piano set, haunting darkened dens of the downtrodden, each new daily layer
of nicotined barroom haze further darkening the peeling gold walpaper with the red-flocked florals that had beamed in straight from Miss Kitty's saloon. I'd do world-weary versions of selected works by Chet Baker, Nina Simone and the
Bugaloos. All the while, I'd trot out my pithy banter as a cigarette dangled precariously - spittle-glued, really - from my bottom lip with an impressively long ash. Bar-goers would take bets on when that impossibly long ash would fall off. Bookmakers would sell odds. Alas, I have come to embrace the notion that I'll never play the theme of a chidren's show on the stage of Carnegie Hall, nor any smoky flophouse on Harry Hines, so guess what? My dreams crashing on the
pitiless rocks = the portal to a vista of your own musical magnificence: for a limited time (i.e.or until I sell it) I'm offering this dusty little gem which could fuel your own fantasies of theme-song (and otherwise) musical greatness. Go on. Buy this Celeste. You know you want to.

This Celeste is in need of a lot of work to make functional, including a thorough cleaning. The actions on some of the keys/hammers are completely disengaged. I would guess this instrument is mid-20th century and may be restorable, or it may simply be useful for parts. AS-IS. The keys I struck when taking the photo sounded pure and clear. My non-expert opinion is
that this could be made to work. The keyboard has a sliding cover. Keys are plastic, and the frame of the instrument is covered in a wood veneer which looks rather cheap to me.

From the internet: "The celeste looks slightly similar to the upright piano but produces a very different bell-like sound. Inside the celeste is a row of slender steel bars and the outer case is wood similar to the upright piano. When the keys are pressed, a tiny felt covered hammer strikes the metal bars. A small hollow box is underneath each of the metal bars. This makes the sound louder. The celeste also has a foot pedal, called the sustaining pedal, which makes the notes longer when pressed." 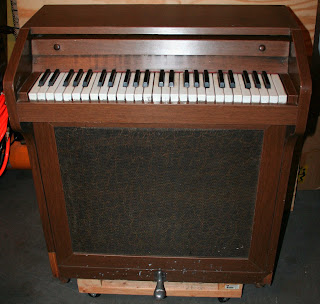 Posted by phlegmfatale at 9:27 PM

Did not know that about Mr Rogers' opening. Parting with a beloved possession? What are you going to fill the void with?

What will I fill it with?

Good grief. I wish I'd known you were selling it (And that I were closer), I'd consider adding it to MDW's collection of musical instruments.

do you still have this item??

itspacific - No. I ended up giving it to someone who wanted to buy it but didn't have the money - he was the only one that responded, and I called him up 2 weeks ago and said "if you still want it and can pick it up, it's yours."