For the distinguished gentleman who has almost everything, may we suggest a taxidermy flying monkey?: 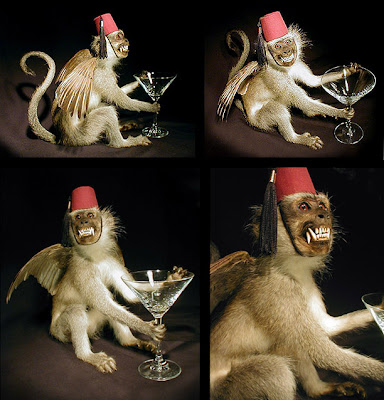 You can see this and more delights at the wickedly delicious Custom Creature Taxidermy Arts site. Incredible stuff. I think I'm going to get a taxidermied squirrel head, actually. I just LUV decoratin'!

____________________
Oh, snap! Cell phone calls failed to trigger car bombs - could this be the result of the dumbing down of terrorism? It's nice to think their leaders are as prone to hubris as the next bunch of elected asshattery/divine rulers/maroons.

Hopefully they'll outdo themselves with even greater feats of boobery and butter-fingered-ness. Or maybe we've managed to kill or nab a bunch of their real proficients at this. That's a hell of a learning curve on getting your suicide device to deploy.

Well, I'm all for tit-for-tat. I think anyone caught failing at a suicide bombing should be hastily helped on his way, and as Dick has suggested, I'd be ok with sending them out covered in pig blood. But that's just me.

I don't know where it is now, but this weekend I saw a news story that there was a 600 yard tunnel from Mexico to the US across the border from one house to another. This reminds me of that scene from Absolutely Fabulous:

Edina: What you two don't seem to realize is that inside of me, inside of me, there is a thin person just screaming to get out.
Gran: Just the one, dear?

The only thing surprising to me about this is the idea that anyone is surprised. I mean, there must be many, many of these things, don't you think? Now, I'm not saying I think half of El Paso is going to collapse into a series of honeycombed sub-terranean chambers like a soufflé in a stampede, but, sheesh! It just seems so obvious to me.

But maybe I've just not been getting enough sleep.

Awesome - she's like the Rodin of Road Kill! One day I will post about what mice can do to a box full of stuffed pheasants in a semi-trailer over the course of a year.

The joke doing the rounds over here is a parady of that credit card ad'.

OH...that monkey be scary nasty. However, it does make a good martini holder. :0)

Hey...hope you have a great 4th, and I'm thinkin' you're an opera buff/singer, etc? I'm saddened by the death of Beverly Sills...lots of good blog tributes out there.

Brrrr! The only thing creepier than a monkey is a dead monkey, with fangs like that and wings! The hat I can almost handle.

But you are forgiven since you also quoted Ab Fab. And very fabulously too, I might add.

lin - ditto about Laredo - well put! & I got a giggle at the "Rodin of Roadkill." I think she'd be flattered.

sudiegirl - Yeah, I find it an odd mix of fascinating and repellent, i.e., fabulous!
Bev Sills was a fantastic singer. Bless her.

barbara - Yeah, it is pretty creepy, innit? But yeah, that simian is rockin' the shit out of that fez. me likee!

Yeah, that's among my favorite AbFab quotes- Gran and Saffie got most of the best lines, actually. ANd then there's Bubble... *sigh* I loves me some Bubble.

Gee, thanks!
Monkeys creep me out anyway, and now I get to picture this for the next few days every time I close my eyes!
The only thing worse than those organ-grinder monkeys are ventriloquists' dummies.
*shudders theatrically*
Have a great Independence Day!
Try to stay cool, I don't think I'll be going outside at all.

christina - I'd normally say I was happy to oblige, but I don't like upsetting someone as hyper-pregnant as you are - I mean, you're totally full of other people. Try not to get upset! :)

You have a nice Independence Day, too.
Yeah, I've been hearing how hot it is, there. You just put your feet up and rest, honey.

Looks like one of those monkey men in the Wizard of Oz. And maybe if it keeps rainin', those tunnels will all fill up and drown the fuckers.

I've completed my own 4th of July tribute at my place.

We know that the English have built a huge tunnel and two bridges into Wales. They're unstoppable!

I rather like the Ulsters' method of tying rebellious Sepoys to muzzles of cannons before firing. That would be a grand top off for failed terrorists, no?