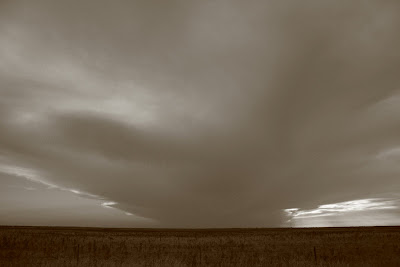 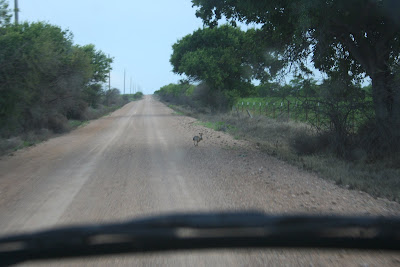 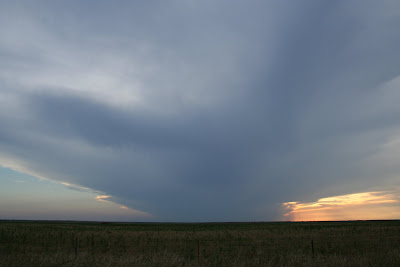 
The trip to the Texas Panhandle was nice. There's been an unusual abundance of rainfall there this year, and the wildflowers are making a rather lurid display of themselves, all tarted up and ready to go to the dance.

Driving out on Friday night through an intense storm was rather exhilarating, with lightning striking all around. Despite my plans to leave early, we left Dallas at about 8pm, so we spent the night in Wichita Falls. Saturday broke splendid and clear, and we headed on up the road.

Right after Vernon, you cross the Pease River, which was wide and rich with swirling red dirt. It looked like red dirt coffee- incredibly thick. One of the cool things about driving through this area of the country is that during and immediately after rain, the rivers swell and look large and rather violent. If you drive through during a dry spell, some river beds will be just that: a broad, sandy swath of ground that it seems senseless to have built a bridge over. I would imagine all West Texas soil right now is about as saturated as it ever gets, but one characteristic of these arid climes is that even during a heavy rain, there is low absorption in the soil, and most of the rain runs off to the nearest, lowest crevice, from whence it sluices into a creek or river. So, anyway, this is the second time I've been privileged to see the Panhandle in a rainy state, and I love it.

There were also these massive dandelions, bigger than a man's fist. I've never seen any like them - they were grand.

Saturday, we drove up into the Panhandle and across to Oklahoma, and then back down to Texas, crossing the Red River a couple times. It was flowing and rather intense, but it seemed not so dramatic as the Pease had, for some reason. The Pease flows up toward Oklahoma, eventually joining the Red at some point East of Vernon. Anyway, we went through some nice small towns in Oklahoma, but a couple towns made me sad, as all the old downtown buildings were completely empty and/or boarded up. I hate to see that, but I suppose that's the way it goes.

Saturday evening, we went for a drive along a dirt road and came to a neat old arch bridge over a neat little mini-canyon type thingie. We drove for miles and didn't see another car, but we saw loads and loads of Jackrabbits. We even saw a baby bunny. There were loads of roadrunners, and I saw the blazing fuschia breast of a purple finch sitting on a telephone wire. I didn't know that area is such a birder's paradise - perhaps it is owing to the incredible recent weather, but I'd venture that someone who knew which birds I actually saw would be impressed by the variety.

We drove that little dirt road until we hit a larger, paved road in the country, which turned out to be Texas Farm Road 1166. We got to a large open stretch, and pulled to the side of the road at sunset, killing the engine to listen to the birds get ready for night. That is when and where I took the above sunset photos. I couldn't decide on color or B&W, so I gave you both. This huge wedge-shaped cloud formation is the beginnings of a storm system which barreled through West Texas on Saturday night. The real storm hit this area about 4am.

Sunday was fine and beautiful again, and after collecting my table and other goodies, we made a little excursion to the Copper Breaks State Park south of Quanah.

Everywhere in the area, crews were out cutting and baling hay. I saw lots of fields of steers who seemed like they were just taken from their milk supplies, standing in tight clusters in the middle of sprawling pastures. There would be the occasional oddball steer off by itself, perhaps smarter than the rest. I realized yesterday that I've always thought of cows as profoundly stupid, but they are smart enough to get under cover when it's raining, aren't they? Then again, if the cover they got under is a tree and it's struck by lightning and they all expire, well, that wasn't very smart after all, was it? Poor pre-cooked beeves.

Oh, my table - I'll try to photograph it tomorrow. I was wrong -on closer inspection, the surface of the table is not one contiguous plank, but is three incredibly well-joined planks. I'm cleaning it today. Being pine, which is a soft wood, there are lots of dings in the surface, but that's just character, right? The base is married to the tabletop by these marvelous bowtie/butterfly-shaped mortise-and-tenon joins. Anyway, it's beautiful and I'm so pleased to have it. It was made in northeast New Mexico, and I'd estimate it's about 70-80 years old.

I also got a couple of crocks from Love Field pottery. This was a pottery that operated from 1923 to 1948 in the area of Dallas where the Love Field Airport is. The cool thing is on the logo, LFP had a little bi-plane. Neat stuff.

Anyway, it's good to be home. Today I'll fetch the doglet from the doggie spa, and it'll be back to life as usual.

Trips to West Texas are becoming my favorite excursion, these days. I've heard friends say the drive to Santa Fe is so dull, but I think only a dullard would fail to see the beauty here. The terrain is beautiful, the people are nice, and considering the changes of the seasons - it can be brutally cold and icy to wicked-hot to the Spring idyll I experienced this weekend - this place has it all. I wish you could see it.
Posted by phlegmfatale at 8:25 AM

I never thought much about cows until we raised them. They're actually pretty fascinating, and smarter than you'd think.

Trips to West Texas are becoming my favorite excursion, these days. "I've heard friends say the drive to Santa Fe is so dull, but I think only a dullard would fail to see the beauty here. The terrain is beautiful, the people are nice, and considering the changes of the seasons - it can be brutally cold and icy to wicked-hot to the Spring idyll I experienced this weekend - this place has it all. I wish you could see it."

Thanks to your descriptions, we CAN see it, and rather vividly at that. Beautiful writing, Phlegm.

flo - Thanks!
Yeah, I suppose when you're attached to as much flesh as a cow is, it's hard to work up much personality, usually. It's funny to hear about the ones which seem a little more lively in the brainpan.

Wow, that table sounds like a genuine treasure - can't wait for the pics! The hardest thing for me about moving out to nowhere was given up my 'junk' runs. Thanks for taking me along in my armchair on yours, it is truly therapeutic!

Don't let anyone talk you out of anything just because you run out of moving van room. I suffered over a year from 'junk' separation anxiety and still do.

I love this kind of thing. You paint a picture with words.

lin - Yeah, it's really cool. I got some wax from Durango on Arapaho (cool lodge-style furniture place) and I'm about to wax the dickens out of the table so it'll be ready for its close-up. And oh, the glories of junking. Believe me, I've weaned meself way down, as I'm an inveterate junker from decades back. I at least haven't picked up anything from someone's garbage pile on the side of the road in years. One man's trash...

tickersoid - thanks, but it's no match to the what I saw, just a tiny tribute. I think you'd really appreciate the rugged beauty of West Texas.

Loved that post. I've driven that way many a time and always love it. Love to drive down some flat, strait dirt road ato see where it goes. Went on a search lookin for the site of the Adobe Walls fight once, and drove all over the northern panhandle. I think the people who live there, and have a way to make a decent living, are lucky as hell. Again, great post.

fathairybastard - coolness - yeah - the place is just reeking of frontier history, too - fabulous! I agree - it must be a wonderful place to call home.