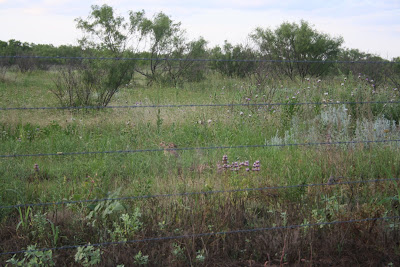 Barb wire and wildflowers. Can you spot the Jackrabbit? He was hunkered down, thinking "mama said if I don't move, no one will see me." Their long legs look kinda gawky and odd, but with those outrageous ears, they manage to be cute, still.

I'll try to do the table picture tonight, but I'm going to dinner with a girlfriend and tomorrow night I've got to go get my hair did, and you see how busy I am. I also want to do another coat or two of my lemon oil/beeswax polish before it's ready for its closeup. I'm probably going to be at my first open house this weekend with my mentor, which is really cool. Kinda excited, kinda nervous. No doubt, I'll be in a state of high chihuahua disquiet before it's all over.

A girlfriend from music school invited me over for dinner last night, and she made a traditional South African dish called bobotie, which is kinda like a savory meatloaf and a lot like a shepherd's pie. Made with minced ground pork/lamb/beef or any combination thereof, savory spices are added(she includes pumpkin pie spice) along with dried fruit. The dish is served with a curried rice, and she said it's perfect with an orange chutney from S.A. which can't be found here, apparently. Actually, I already thought it was perfect without the marmalade, so I didn't miss it. Beside shepherd's pie, flavor-wise bobotie also reminded me of a Greek moussaka, only without the eggplant.

She had needle-woven bead napkin rings and I surprised her by knowing they were from the Ndebele people. They have a very distinctive method of needlework, doubling back through previously threaded beads to cause the beads to stack up at obliques to each other, creating a herringbone effect.

I grew up with no idea where my forbears were before Arkansas. My great x 3 grandfather who fought in the Civil war married a girl from Kentucky, and that's as far back as I know on Pop's side. On Mom's side, someone at a family reunion last year told me we're descended from a Highlander named McCord who fought at Killiecrankie and then crossed the pond. So, in light of my own murky notions of my family's origins, I was amazed when I asked when her family came to South Africa and a crisp "1688" popped out in her lovely accent. They were a winemaking family, Protestants escaping persecution in France. It's ironic to think of the French chasing out vintners. Now France is largely Muslim and they're still chasing Protestants out. Oh well.

Well, that turned into a rabbit-chase, didn't it? I'm having a lovely week, and I hope all of you are, too. But it's suddenly turned horribly hot, innit?
Posted by phlegmfatale at 8:14 AM

We found the Jack, but had to blow the pic WAY the heck up to do so. What a great story about your S.African friend. And that is so nice to have a sense of family history that goes back that far.
I think, with their new Prez, the French have a hope of regaining some self respect and bringing thei rapidly growing vocal Muslim minority back in line.

This week's photos are terrific, but please promise not to talk about the heat!

You had the pixels turned up on that shot...great capture!

Hot???? We actually had a little snow today.

Friends and I took a French girl to eat in Salado at an old place called the stagecoach inn back in the '90s. Been there since the 1830s or somethin. We were tellin' her it was really old, and she asked "What century?" We were like, "Uh, the last one." All laughed.

tickersoid - Yuppers. She's much better, thank you. I'm ready to get the satellite dish off her head, though.

hollyb - yeah, glad you enjoyed the photo sleuthing. Yes, I have hopes that the French can turn it around.

leazwell - well, it's been gently warm for months now, and we only got slammed with the heat for the first time this week, so, you never know.

fathairybastard - That's funny - I guess they have stuff sitting around France from a handful of centuries... It's all new, here.

Sigh ... I guess my priorities have changed a little since moving out here. I looked at that photo and immediately lusted deeply after that FIVE strand, TAUT barbed wire fence. very N-I-C-E!