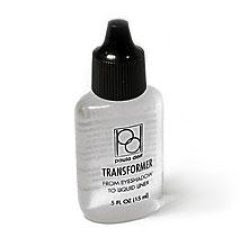 Transformer by Paula Dorf. This stuff is great - one drop of this on a brush turns any powder makeup into a liquid eyeliner. It's not water-proof, but it's not drippy, either. Good product, especially when you're looking for the perfect shade of liner. I recommend an eyeliner brush by Chanel, too-- a good brush for this stuff is essential.


The other thing is Morning Zen incense by Shoyeido. Shoyeido is a Japanese incense house that's been perfecting th

eir product through 12 generations and several centuries. Beautiful incense that doesn't smell like hippy crap or cat pee. (In my opinion)

Speaking of hippy crap, I don't know what it is about patchouli - some of it smells amazing to me, and some of it reeks horribly. I know there are several different varieties. There's an Indian restaurant I love in Dallas that burns the cat-pee patchouli by their entry at a little shrine thingie sometimes. Ew. I usually go there with my fingers crossed that they aren't trying to butter up Vishnu or Ganesh that day.

Going shooting with a friend Saturday.
She said "Phlegm, wear sensible footwear. Do you have any sensible footwear?"
Naturally, I responded that all my footwear is sensible. It makes perfect sense to me.
She said "It's a cow pasture, Phlegm."
Point taken.

Oh, and one more thing on "Rules of War"-- isn't that like "Fornicating for Abstinence?" I'm just saying...
Posted by phlegmfatale at 12:48 AM

And given the weather this week, it's gonna be a MUDDY cow pasture. Good idea about those Wellies.

Yesterday at Costco of all places I smelled Patchouli - WTF is up with that?? Costco is a bastion of Capitalism, not a Hippie-Freak Paradise!

When I click the Morning Zen link it goes to the Paula make-up site. Help!

dirtcrashr-- you know, I've been smelling it on the most unlikely people lately, too. Clearly, a plot is afoot!

dutchess - OOPS - Thanks so much. You know, as I was hitting post with that early this morning, I was thinking I should have double-checked that second link...

I bet he's got a BIG fuckin' drag bag. Hilarious. My sister used to burn lots of incense in the 60s and 70s. That was enough for me, tired of the smell wafting down the hall into my room. You need to do a post on the shooting.

On the rules, I think you have to adhere to them, till the other side proves they won't. Then, no holds should be barred. Whatever it takes, otherwise you look like a liberal pussy, and liberal pussies don't win wars, if you've noticed.

I'm sure whatever your sister burned was not remotely of the fine quality of MY incense, dear. *ahem* I also said in there that some incense is vile, but I should have said I find most incense insufferable.

Yeah, war and old age ain't no place for sissies.

Fag bag? Now, I didn't say Fag Bag. Don't be tryin' to get me into somethin'. I'd NEVER accuse ol' Mushy of being light in the skivvies. Maybe he's just a dabbler. He dabbles. Ya know, ya start out sniffin' ladies undies, next thing you know you're tryin' 'em on. All I'm sayin'.

And what I meant to say about the incense was that sis used it to play hippie, and ruined the whole thing for me. I grew up with both an overbearing dad and older sister, and ended up thinking that in order to be myself I had to actively differentiate myself from them. So no incense. I'm sure yours is cool though. I'll stick to Glade.

*LOL* EEK! Er, I meant DRAG bag. EEK. How'd that happen. I'm on vacation, the last Elysian fleeting moments of TIME OFF™ and my brain is not functioning properly, obviously!

Let it be known that I'm a dimwit. I'm going to own it. Sorry.