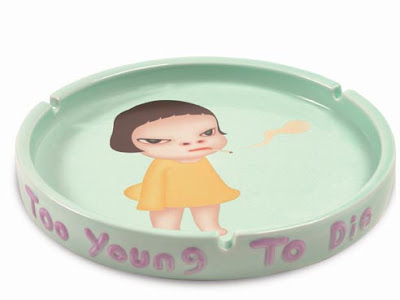 Lest you think I'm practical: I don't smoke but I want this ashtray by Yoshitomo Nara. Super-cute. It's $50. I suppose it could be a finger bowl for rose water or some such. *OK - that was really sarcastic -- did you catch it? I thought you might. Anyway. Hmm. Want. It.
__________________
Bought a house nearly 3 years ago, and had a phone installed, like you do.
Ever since then, we have been getting wrong numbers for Craig. Now, the wrong numbers have been predominantly female of a downmarket stripe, if you know what I mean: several varieties of trashy. You have to imagine strung-out, breathy female voices asking for Craig in the way you'd imagine they sweet-talk their pimp.
Now for three years I've been thinking these were booty calls. No. Tonight a woman called and let the cat out of the bag. Here's her message:

Hey Craig. I know it's been a long time. I guess this number is
a California number. Anyway, I wanted to see you and I have some friends
who wanted to buy, some, uh....

So, there you have it: he was a shoe salesman. It's so odd to me that these 3 years I've been thinking these were booty calls, when this one seems like a drug call. Maybe Craig is in jail.
Posted by phlegmfatale at 10:32 PM

Craig is living with my sister in law, he doesn't sell shoes anymore but he sure wears em.

You need an answering machine to screen your calls. Message something like "Craig's probably in jail or dead. And I don't sell dope. If you still think you have the right number, talk to me".

50 smackers for an ashtray?
Yep, it's official. You're high maintenance. ;)

It started with me trying on flip flops or sometimes sandles. I thought it was fine, I could handle it, but before long, I was trying proper shoes and boots, it was getting out of control.....

myron - I was thinking of answering in the script of the 911 answer center from LawDog's blog...

dick - Oh, my! I'm only used to people saying that to me in real life.

In Auckland, I used to get calls for, and I don't remember his name any more, but the same guy. Most of the messages were incoherent, but one day there was a normal message by a nice sounding woman with a phone number, so I rang her back to let her know. She listen to me very politely and then burst out laughing - the man was apparently a rather successful gay movie producer/director, and she was thinking the whole time why did this American woman return the guy's call.

Apparently the word got around because we never had messages for him any more.

meg - that is SO funny. I wish one of these ho's would leave her number and I could get the word out. I've thought of all manner of cruel statements: "Craig is dead." "Craig died of flesh-eating bacteria." "Craig is in prison."

I like "Craig is in Prison" you could add "doin' 20 to life for sellin' whatever it is you were lookin' to buy"
And yu might be High Maintenance...but you are worth every red cent!