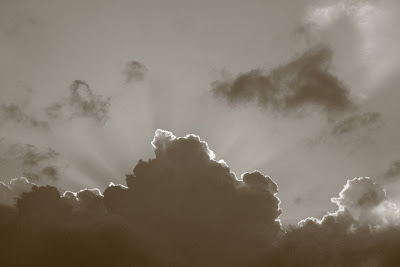 After I snapped this photo I switched over to color and you can go to my diorama and see a nearly identical image in a soothing array of blues.
This has been a good week, but it's been a trying one in some ways. I've worked till nearly 8pm 3 nights, and there is at least one spooling hairball looming large and bad to be dealt with toute-de-suite. I go out of my way to be as nice as I can to people. When I was young and finding my way, I think back to two particular crossroads at which my life could have taken a dramatic and irreversible turn for the worse. At one of those crossroads, someone showed tremendous kindness and understanding, and at the other I was served up a nasty dose of reality which taught me how mean a person can be.

Now, I strive to instruct with kindness. Working in this field, I often say that I'm the first solid parenting a lot of kids get-- so unprepared for life in the world are they. I try to gently nudge in the right direction in a way that is not offensive or obvious. However, several times recently, some folks have been such presumptuous, solipsistic jerks that I have been compelled to crack the whip. I am beginning to believe I'm going to have to ride herd on all these special-needs-patients until their leases are up, at which time they will pointedly not be invited to renew their leases.
Knowing I have the capacity to wield the hammer of justice, I generally opt for magnanimity. However when forced, I'll overcome all hesitancy and be as much a bitch as I need to. Don't make me go there.
Have boots, will discipline.
Posted by phlegmfatale at 12:35 AM

You're a walking, talking lesson in the wise use of power, benevolent autocrat that you are. And by the way, consider yourself tagged.

It's a bird! It's a plane!
It's Super Twisted Bitch!
Handle 'em girl.

Wow, that is just incredible.

Oh yea, purdy. Wait, I think I see the Virgin of Guadalupe there on the left. Call Ebay.

fathairybastard - I thought I was a benevolent dictator.

attila - thanks - the clouds were simply breathtaking,and I only captured the tiniest essence of their beauty

The photo is bloody fantastic!