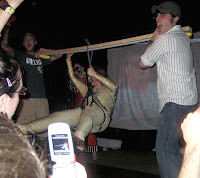 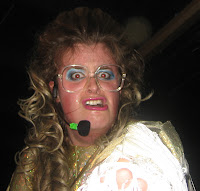 Here's a couple images I er, uh, borrowed from some where on the net. These were taken at Rubber Gloves in Denton Tuesday night. The guy in the striped shirt at the right showed up at the Dallas show and held her up again for this dynamic portion of her performance. She was just spinning around and hanging upside-down while she sang her Gold Pants Lullaby. It's so clever the way she-- a plump white chick from Iowa -- so cleverly subverts the entire hip-hop medium-- this has been screaming to be done by someone more subtle and clever than Weird Al, and now someone has. Huzzah!

You know, I don't always dress like this. Sometimes I like to wear something gold and tight!

No doubt you can see why I love her like I do - She totally rocks! div>
_________________________________
Was in my R.E. test prep class Saturday, but I woke up late, having usefully set my alarm for 7PM rather than AM. Nice.
Then I was halfway to useless the whole day, all though I knew most of the material pretty well. Still I'll be so relieved to get through the test and have it over with. And no more 8 to 6:30 Sat/Suns. Ugh.
Speaking of UGGS, it's been humid and warm enough to feel muggy lately, so I was baffled when I saw a pack of teens out today in UGGS. That is so 2005. Maybe they were being retro-ironic. Whatever.
Posted by phlegmfatale at 11:02 PM

Looks like that show was THE place to be!

barbara - but no! our adolescence is too recent to be lampooned thusly!