There's a cat in England that's been stealing underwear from clotheslines around the neighborhood and bringing them home as offerings to its hoomans. He started with socks, then garden gloves seemed to be a gateway garment over to the ladies' underwears. 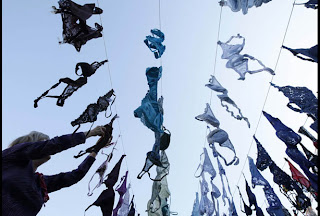 Since then he had also pinched builder's gloves, a knee-pad, a paint roller, rubber gloves and 10 pairs of children's underpants. On average he commits 10 robberies a day.

"He brings them back as presents," Birgitt told the Echo. "We can't give him back now as he makes such an effort with all these gifts. He's got a lovely personality and is a very loving cat.

Would be a little awkward, I should think.
Not related, really, but I was visiting an American friend living in England when one of her local pals was laughing about her washing machine crapping out. She said she might have known it would happen "when I was washing me smalls." That was the first I'd heard of that British euphemism for underwear. I like it.
Cute!

Our cat just brings us dead mice. Actually, it's probably better that way.

Except for the mice.

Sounds like a cat that needs to be kept indoors for peace between neighbors.

I wonder if the cats name is "Arnold Blaine" ?

Excuse me,
That should read
I wonder if the cats name is "Arnold Layne"?

Can you imagine the chagrin the gentleman of the household experienced when the wife asked where this particular bit of butt floss came from?