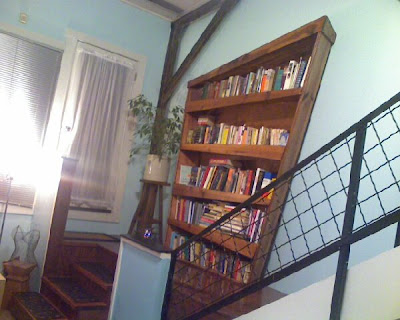 A couple interior designer residents happened by my loft a week ago and said "no! no! no! no! no!" about where I had this bookcase. They told me it belonged on the landing of the staircase. Actually, the place I'd stuck it was just the default place, because it wouldn't fit upstairs in my bedroom, alas, and I didn't really give it a lot of thought after just sticking it one convenient place in a fit of disappointment.
I don't know what it is about certain musicians, but I adore Thom Yorke and I just can't peel into a new cd of his right away. Have to save it. Anyway, was feeling down and in the depths of crapitude Tuesday night so that became the moment to crack into In Rainbows, the new Radiohead cd. Great stuff for moments of industriousness, it turns out.
Buoyed by good music, I cleared out the little display case I had on the landing and emptied the bookshelf of books, and then went out and found two strapping young residents to shift the bookcase for me. It's not terribly heavy and I'm strong, so I could have lifted half of it, but I'm short enough that leverage can be an issue. Anyway, newly tidied, framed by the building's support structure and against the robin's egg blue wall, I think it's never looked better. Sometime when everything looks decent, I'll post photos taken with a better camera and at a better time of day for lighting.
Have a lovely Wednesday. I will. Tonight, shooty goodness with Holly, where I'll get to practice a bunch more with the Ruger Mark II, as well as a couple other .22 pistols. I'm planning to try to shoot in the steel plate matches the rest of the summer at my gun club.
*pow!* *pow!*
Posted by phlegmfatale at 12:01 AM

The bookcase does look great on the landing. You got good advice...

That really is the most awesome bookcase ever.

It looks fantastic there! I would hire those designers.

I'm glad to hear you are enjoying the latest effort from Thom and co. It's a much more mature sound than previous efforts, don't you think?

Wonderfulness-shooty goodness! I so love that bookcase, it does look great there...

perfect spot for it. Your new digs really sutis you.