About 20 month s ago, I had a lively discussion with a fascinating woman via the comments section of someone else’s blog. One day, I opened my email to find she had written me, and the conversation carried on over the space of a handful of months. Turns out we have a lot in common, and she has a lively, zestful outlook which greatly compliments my own approach to life. After 6 months or so, she suggested we talk on the phone.

OMG! Talk on the phone? To a person from the internet? Uh, I don’t know about this, but I suppose it would be rude to refuse.

So, in a very kindly and understanding way, she listened bemusedly as I prattled without drawing breath for about an hour on the phone one Saturday in March last year. A few more phone calls later, I’d calmed down enough that I let her get a word in edgewise, and it turned out I was right to like her so much.

Okay. I confess I’m a spaz and it takes a special person to let me settle down and be at peace—that almost never happens-- and she had the patience to do so. About a month later, we met at a restaurant and this was another hurdle. 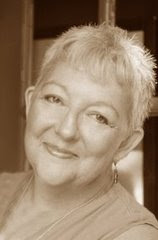 Turns out my trepidation was misplaced, as she was warm, lovely and very welcoming. I loved her immediately, and it turns out she's the big sister I never knew I needed.

Since that time, she’s introduced me to a whole bunch of wonderful people, and has even been at my side as I’ve hatched into a wobbly baby chick out at the gun range. It’s a wonderful thing going shooting with a girlfriend.

Yes, I know this is meant to be about telling you how much I love Holly and what a special friend she is, when in fact I’m just removing all doubt that I’m a perennially juvenile sort and perhaps a little unusual, but I think it says a lot that Holly would have the patience and kindness to see through all the bullcrap and love me as a friend in spite of my special needs.

Holly’s birthday is today, and I hope it’s wonderful.

I love you, Hols. You’re fabulous. Thank you for being such a dear friend.
Posted by phlegmfatale at 10:34 AM

DAHM, you made me CRY! I hate it when people make me cry in public! Ruins my rep as a bada$$!
WHy shoot, now people will know that I love you more than cream gravy!

Hols - call me a cornball, but I cried when I wrote it. I love you more than cream gravy, too! And we all know you're still a badass, even though I left out the line "remind me never to piss you off." *Big birthday smoochies*

Happy Birthday, Holly! You are a fantastic friend to me, too.

I love ya to, Holly. Happy b'day twin.

She is a special friend, warm and giving. We are lucky to have her in our lives.

I need the kleenex, please.

It's wonderful when you have someone like that in your life.

She is a wonderful woman, and I suspect she'd say the same about you.

She's a good judge of character that way. ;)

We're all so lucky to know you. You really are as fabulous as all that!

Have a great day and a wonderful new year!

Thanks to all of you...Lainy your card is in the mail...no really, I bought it last week, just forgot to mail it on all the hub-bub of getting ready for "THE weddin'"

May teh intarw3bz bring you more wonderful friendships!

And Holly, most happiest berfday!

Cheers to you both.