Britain's Department for the Environment is moving forward with plans to fine households 50 pounds each (about $100-ish) for not recycling and for producing excess waste. Apparently the goal is to reduce the amount of rubbish households produce in England. It seems they will run out of landfill space in about 9 years if there is not a serious reduction in the amount of rubbish produced by the average household. I understand this is a serious problem, and I'm not making light of that, but...

What I wonder is why everything has to be so bloody over-packaged in the first place? Here, if you want to buy a cd, for example, there's a whole bunch of plastic you've got to plough through to even get to the shiny bit you paid for. And food? Why do so many things have redundant wrappers? It's funny how big a role style and perception plays in how things are pac 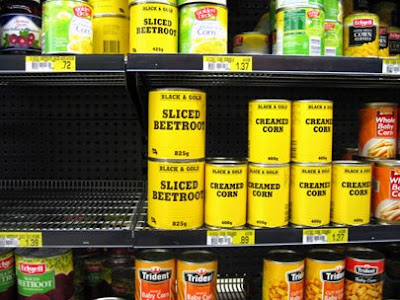 kaged and sold, and I suppose it affects how/when/what/why people chose to buy.

I must say, though, that at the gun show last weekend, I was walking around testing my new custom earplugs, I walked by a trader who had a massive table of components for re-loaders. The boxes were simple and to the point, and didn't seem to have been the product of a marketing campaign or even of a public relations department. Matter of fact, all the cartridge boxes I've seen don't look like products tweaked for a sexy sales scheme. I think that's really cool, actually.

Maybe a massive un-sexy campaign is really what we all need to be going for. We should, perhaps, make a study of the rugged utilitarian homeliness of, say, some certain Texas polygamist funranch for how to pare down and simplify.
Um, are plastics a petroleum by-product (anyone? g bro?), and if so, if we didn't make all our yummy plastic crap from that stuff, what else would we be doing with it? Would it go straight to landfills? Could we set it ablaze and jettison it into space? On second thought, if plastic wrapping and stuff is just a way to get rid of by-products of other industrial processes, then maybe all the over-wrapping is a good thing? Hmm?
I don't know. IT's late. I'm tired. Long, hairy week. meh. Have a nice Sunday.
Posted by phlegmfatale at 12:01 AM

I hate bubble wrap. Especially when it takes a buck knife to get into. That shit is totally unnecessary. How the hell do these marketing twits think we got along years ago?

And yes, plastic is a product of petroleum. Way back in the 60's Sears came out with a shoe line that was plastic. Of course they had a fancy name that CRS won't let me recall. I told the shoe clerk I wanted to see those plastic shoes and he indignantly informed me they weren't plastic but a by-product of petroleum. To him I says I'm an operator in a chemical plant that process feed stock for about a gazillion kinds of plastic and by-products of petroleum. I want to see me some of them plastic shoes.

Chris recently purchased a small utility tool wrapped in a dreadful blister-pack. As we BOTH struggled to open it sans utility tool we stopped to ponder the irony. Perhaps the manufacturers are peddling more than a mere utility tool. "Utility tool~Now fortified with irony."

Funranch. Ha ha ha. You my dear never cease to make me laugh out loud when reading your posts.

Packaging isn't by-product, it IS the product. Once they polymerize it, it's hard to put it in your gas tank.
I'm with you on the packaging. Drives me nuts to get out the poultry shears to open a package of batteries. If I use a knife on them, I'm afraid I'll cut my leg off.

We have plenty of landfill sites in britain..but as we are ruled by the unelected EU superstae and the dutch have run out of space a one size fits all policy has been introduced.The rising tide of public anger at local govt punishing people over rubbish is becoming a factor in national politics here.

myron - THAT is hilarious. You schooled that shoe salesman.

rocket girl - Irony, indeed. Alanis should write a song about irony. I mean, irony for real. Glad you got a grin out of it.

g bro - Yup - selling an idea, ratehr than the product. *much eye-rolling here*

thud - I can't believe the Brits threw their lot in with that bunch of pigs on the mainland. It's gonna get ugly. It should be a factor, and y'all need to throw out your elected officials and secede from the EU or re-negotiate terms. Better to secede, I'd say.

Anything carbon based can be turned into oil. They are doing it right now on an experimental basis.

We could empty our landfills and be energy independent if we just went online with this new technology.

Can someone 'splain to me how you run out of landfill space? It's just a hole in the ground right? Why not dig a deeper hole?

Obviously I'm lacking in the hard science of sanitation engineering.