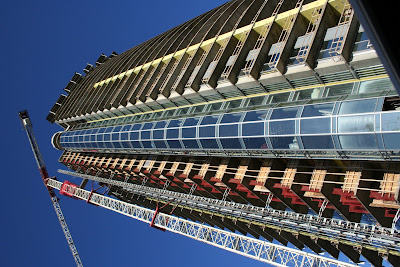 Sometimes I take my favorite pictures from the sunroof of Loulou without even aiming. This is the 29-ish floor luxury condo building Azure which is being polished off at the corner of Wolf and McKinnon streets. McKinnon is the section of Harry Hines that is northbound between downtown and the tollroad where Harry Hines splits.
By the way, Harry Hines is a boulevard - I just realized how unlikely that name would sound to the uninitiated. A part of me still likes to inwardly giggle at the name Harry Hines. This is the same part of me that giggles at fart jokes.
Golly, I'm tired. Back to work tomorrow, but at least I get to sleep until 8am instead of getting up at 6am.
I tried making meringues, but I think I need to do more research on baking times, etc. They came out foamy and crisp on the outside, yet still chewy in the middle - not as I would prefer.
Sunday the teacher was joking the woman next to me and said "you must be from Arkansas" and a few people chuckled, and I said "she may not be, but _I_ am from Arkansas," and the room erupted in laughter. After class he apologized to me and said he hoped he didn't offend me. I told him there are frightening folk from every state, but that Arkansas had come by its reputation honest, and I'm related to a few of the reasons why... I also said he shouldn't hold against Arkansas the fact that I came from there.
I'm going to have to do a crab boil soon - I'm hankering for snow crab. I stopped by my local cajun-style shuck-n-jive type joint Sunday, and they only had king crab, which I find inferior in flavor to snow crab. I ended up leaving part of this expensive meal on the plate. Next time I'll just go straight to the store and buy what I want, cook it at home and save about $10 on the meal. Pity. I hate cleaning up that kind of mess, and I pretty much don't like cooking seafood in the house.
Oh well. Have a great week!
Posted by phlegmfatale at 12:15 AM

Harry Hines - did someone live a life attached to that name?

Re. crabs, I love the idea of a crab dinner, but it's a lot of work and kind of little return... I kind of gave up on it about 15 years ago. Though I like soups with crab meat...

We got some of those people around here too!

I have a cousin who works those tall cranes...on a job in Atlanta now at over 600 feet.

You take better photos, without aiming, out your sunroof than I take aiming, squinting and holding my breath.

I prefer King crab to snow crab myself, as snow crab are way too much work to get a couple of miniscule shreds of meat out of those skinny legs. At least the snow crabs we get here.

As you already know from our chats, I am ALL about cooking seafood at home; better quality control, better portion control and less cost.
I control the after-odor by cleaning the pans immediately with lemon juice, then soapy hot water, then more lemon juice. I also try not to spill in the broiler. BUT, if I do, it gets washed immediately, too.
Also, my grocer pre-cuts the legs for me; that makes getting to that wunderbar meat so much easier. I don't even need a cracker, I just break it w/ my bare hands. I am such a Savage. OMG, now y'all have a mental pic of me like DH in that restaurant scene attacking the lobster, doncha?

Aaaa, there folks to giggle at everywhere. And crab takes too much work to eat. Now, a 10 oz. lobster tail slathered in butter and garlic, that's another thing entirely.

Love this photo Phelgmy. Looks like the prow of a huge ship, as seen from below.

One day I will muster the courage to actually TRY eating crab legs.

I agree with MIN: alot of work, not alot of meat. Although softshell crabs are freakin' awesome! But they are really expensive and only available for about a week or two after crab molting. Perhaps we should genetically engineer a crab that always has a soft shell and then farm raise them. Without a hard shell to impede them, they might grow to be huge! Imagine a deep fried crap the size of a cocker spaniel that your family can share like a thankgiving turkey! BWA HA HA HA!!!

I saved the pic and set it as wallpaper.

I'm actually so scared of heights that now I can get sweaty palms and butterflies in my tummy just by minimzing the windows on my desktop and looking at that pic. Brr.

You're so cool. LOL

meg - Yeah, apparently there WAS a guy named Harry Hines who was prominent in Dallas history, but I couldn't find any information on him.

mushy - wow - it must be thrilling in a way to run one of those cranes. It would take a lot of work for me to get past the thought of how high I was perched on a tinkertoy set.

barbara - You know, even with all the work for a return of less meat, I prefer the flavor of snow crab. In fact, tonight's the night Ima gonna git me some.

hollyb - Actually, that's one of my favorite Daryl Hannah scenes,ever. Thanks for the tips - I'll try them when I do a crab boil tonight

fathairybastard - you know, lobster is such a gamey flavor that I still prefer the delicacy of the snow crab. THere's a local place that charges about $10 for a bowl of their super-buttery lobster bisque, and it's totally worth it. The tails haven't thrilled me that much, though.

lj - Yeah, it is weird and compelling to me. I started to turn it upright, and I decided it felt right to stay horizontal. It's kind of mind-bendy.

heather b - well, unlike mammals and fowl and fish we eat, crustaceans don't have a vascular system, so there's no muck and ick of veins and such. It's just soft, fleshy meat. Rowr. I'm getting hungry. After I finish posting here, I'm going to take the dog for a long walkie and then go fetch me some crab. woohoo!

Darkmind - WOW! I never knew that about softshell crabs! It's kind of creepy but still magically delicious. I like the little fried crab appetizer they serve at my favorite sushi restaurant. You eat them like potato chips. Pop 'em in your mouth. Yum.

tam - that is absolutely WILD! I'm glad you liked the pic enough to keep it. I confess when I looked at the image full-screen on my big monitor at work, I did feel the slightest bit woozy. I can feel woozy looking up a telephone pole at the clouds drifting overhead, though. I'm un-fond of being in tall buildings, and decidedly abhorrent of being in airplanes. Alas, I like to BE in other places, so the travel aspect is unavoidable.

Sister - Bald Knob Arkansas: home of the Red Dick Cemetery. Who could forget that place?

zelda - takes one to know one!