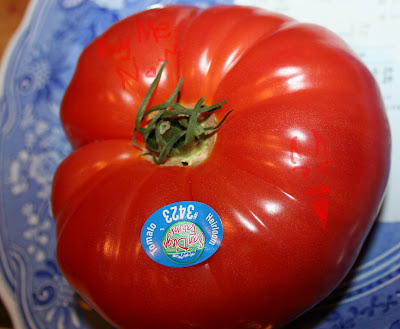 ...in which our Heroine succumbs to demonic influence and purchases overpriced "heirloom" tomato...
Clearly this tomato is in league with Lucifer. I feel like I should write it into my will or some such. Anyway, it was such a lovely tomato, "fooll an' plomp" as advised by Penelope Cruz in Woman On Top. Ok. So I'm a sucker. So they saw me coming, had number. I saw the price at the register and just knew I wouldn't have the will to live through schlepping back to the produce department to make another selection, so I bought it anyway.
What really beat me down about this shopping experience happened when I was on the "shaving needs" aisle and was going to buy a razor a close associate has been raving about. Especially since the weather dictates that within 5 minutes stockings will not be an option, I thought I'd make the switch to something more substantial than the disposable pieces-of-crap razors I've always used. [disclaimer: most women have razors on hand, though few of us actually need a razor for any reason. Readers should not conclude that I have hairy legs nor should they imagine me in Moses sandals with little furry tufts bursting forth from between leather strips from fat little hobbit feet.] I noticed the razors display seemed a bit odd with a sort of cage containing all the better razors. Suddenly, as I reached for the instrument of choice, there was a huge electronic doorbell sound somewhere from nearby. This freaked me out and I pulled my hand back, mostly because it hurt my ears. I reached again and *Bling! Blong!* Yeowch. I quickly realized this must be a shoplifting curtailment device. Fair enough - these are somewhat expensive items and I suppose they are therefore a target for shoplifters. The third time I managed to pull back the razor I hoped for, but not before I noticed that two manager-types were suddenly a few feet away and busily tidying up the listerine bottles and tampax. Um, ok.
Today, as happens several times a week, generally, I had to drive across downtown a couple times. Usually, I'll cross on Griffin/Field street, which takes one under the overpass for Woodall Rogers Expressway which is where the intersection is that I mentioned in my December 13, 2006 post. People on the south-bound service road are meant to Stop when they get to the big red sign that says STOP, but many people roll right through as though it isn't there. On Dec. 13, I was exiting the expressway and a bitch nearly hit me as I drove on through, what with me having the right-of-way and being royalty, and all. Then she had the nerve to chase me down and flip me off and I yelled "Stop sign!" back at the bitch. Anyway. She seemed to think she'd done nothing wrong. As I said, usually, but today I foolishly took St. Paul. Alas!
Tonight I was watching the news on the local Fox affiliate and saw an hilarious bit on that very intersection. A couple stars from Reno 911! were in town to promote their new movie which opens on Friday. The Dallas Police enlisted these guys to harrass the motorists who rolled through the stop sign. Anyway, they've posted some outtakes on their site(watch it here) and though it can be slow, it's hilarious. Especially when Lieutenant Dangle made the Mexican-American driver "Repeat after me: We will obey the laws of Texas which we won from you fair and square."
I would have made an ass of myself if I'd seen them, though, because I would have stopped and grinned at them like the simpleton I am. Some people just shouldn't be let out in public.
Posted by phlegmfatale at 2:01 AM

Labels: devil made me do it, razor, Reno 911, shoplifting

I vaguely recall having stumbled across a piece of exotica in my earler high school years, the forbidden fruit type, a book by Xavier somebody where in one chapter she discusses a man who went through the vegetable section of a grocery plunging "it" into the tomatoes.

Anyway, succulent tomato you got there. Enjoy!

LOL...that was hilarious! Those shorts. My eyes, my eyes!

btw, I would never suspected hobbit feet on a woman like you!

I DON'T have hairy hobbit feet, but I thought it would be fun to describe some.

I once read a post nuclear-apocalyptic novel in which two writers travel from TX around the Former USA, so that they can report on the State of the Former Union.
In one of the stops they make, they are treated to fresh produce in SantaFe. The writer describes eating the tomato as you would normally eat an apple.
That is exactly what your pic reminded me of !

However, when I think "heirloom" I think "antique". Therefore, I don't know if "heirloom" is a good choice for a tomato breed. Who wants to eat old tomatoes?

If I had been with you I'm not sure I could have allowed you to buy that tomato. The dinging razor door it the best part of our weekly shopping trip. I usually just let the boy ring it till and employee comes. A

That's Xaviera Hollander, the "Happy Hooker". A freak, and a VERY good read back when I was in high school.

And those guys are great. Can't wait to see the movie.

Isn't an heirloom supposed to be something that you pass down to the next generation in your family?

Then again, as expensive as these tomatoes are, you oughta...